At the Future TV Conference in Copenhagen, delegates wrestled with strategies to compete with global video providers such as Netflix. However, underlying these discussions was a deeper concern: global SVOD’s impact on the cultural identity of the country. 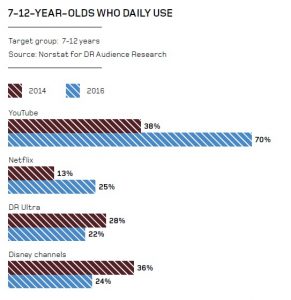 Just as in the US and UK, Danish kids are spending increasing time with streaming services, and much less time watching regular TV. 15-29-year-olds halved their daily TV viewing between 2011 and 2016, going from just over 3 hours to just under 1.5 hours.

This dramatic decline has been accompanied by strong growth in the use of streaming services, and particularly U.S. based Netflix and YouTube.  Between 2014 and 2016, the number of 7-12-years-olds using YouTube daily increased from 38% to 70%. Netflix daily users almost double over the same period, from 13% to 25%.

At the same time, traditional television brands lost their luster. Kids using DR Ultra daily fell from 28% to 22%. Disney channels suffered even more, falling from 36% to 24%.

When asking Danes which video service they would miss the most, the divide between young and old becomes stark. Those in the age range 3-to-39-years strongly favor Netflix and YouTube over traditional television channels. 20% said they would miss Netflix the most, 18% opted for YouTube. Only 6% of 40-59-year-olds said the same.

Conversely, just 16% of the under-39s said that they would miss DR TV channels the most. Whereas for older Danes these channels remain a vital ingredient of their entertainment diet, with 35% saying they would miss them the most.

Children’s habits are set for life

There is a growing realization that the young, and specifically today’s children growing up in the connected-screen era, are unlikely to return to traditional television. These children simply don’t understand the concept of having to wait for anything that they want to watch. DR, the public broadcaster in Denmark, put it this way:

“It is impossible to imagine that the present generation of children – when they become adults – will give away the control, make themselves comfortable in the sofa and wait for their favourite programme to be scheduled on a traditional TV channel.”

Understandably, this has the Danish television industry rattled. As I talked with Future TV Conference delegates I asked them if they were concerned about the increasing dominance 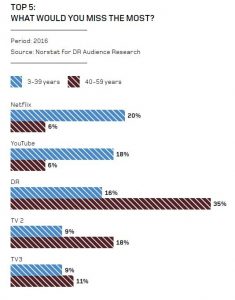 of U.S. services like Netflix. All were quick to smile and praise shows like Stranger Things and House of Cards provided by the SVOD giant. But their mood quickly darkened as they talked about the impact on Danish media and on the cultural identity of their children. They are acutely aware that locally produced content, teaching Danish values and customs, is being displaced by US content teaching something quite different.

And that is the key challenge many local TV broadcasters around the world are wrestling with. How to reestablish a strong voice in the lives of their children in the face of global SVOD competition. Nothing less than their cultural heritage is at stake.

Young people around the world are switching television viewing for online video.

That means they are being exposed to much less local content, and much more US and global content.