FuboTV has grown far beyond its roots as a soccer-focused service targeting Hispanic young men. Today, it is a fully-fledged pay TV service with users watching as much as traditional pay TV. It also has some unique features unavailable through other vMVPDs.

Fubo TV has an extensive array of 90 channels in its $54.99 a month base package including 90+% coverage in the U.S. for CBS, NBC, and Fox. It has just added Discovery channels, including HGTV. It also has more news channels and some regional sports networks unavailable on other vMVPD services. The content mix seems to be resonating with subscribers. 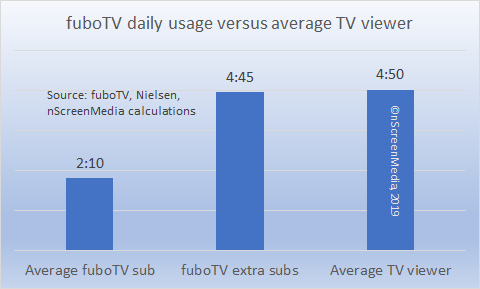 , users watched more than 3 billion minutes of video during the first quarter, a 200% increase from the same quarter last year. Time spent per subscriber also showed significant improvement, up 137% over the same period. The company also said that its best customers, those subscribing to the standard and extra packages, spent 142 hours watching in June.

The company did not state how long viewers watched for, but we can get an idea since fuboTV said in a press release in October 2018 that it had 250,000 subscribers. Using that figure shows that the average subscribed home watched for approximately two-and-a-quarter hours per day in the second quarter. fuboTV’s best customers viewed more than double the norm or four-and-three-quarter hours per day. Nielsen says the average TV viewer watched about the same as fuboTV’s best customers, 4 hours and 50 minutes per day.

However, fuboTV is not just seeking to differentiate itself through content. Since the software platform that fuboTV runs on is home-grown, it can innovate features and functionality to fit its schedule. For example, it was also one of the first vMVPD to launch dynamic ad insertion, a feature which still eludes some other services.

fuboTV broadcast every game of the Women’s World Cup in 4K/UHD on Fox, FS1, and FS2. Some of the games were also broadcast with high dynamic range (HDR) using the HDR10 standard. The company supports most 4K compatible streaming devices, including Apple TV 4K, Chromecast, Fire TV 4K, Roku Ultra, and NVIDIA Shield.

The company trialed 4K live streaming last year with the Men’s World Cup. Moreover, you can expect more 4K live content in June and July, including some MLB games and the MLS All-Star game on July 31st.

As of right now, fuboTV is the only vMVPD to offer live streaming in 4k UHD. Hulu has just reintroduced 4K delivery, but only for its original on-demand content, not for its Live vMVPD service.

Horse-racing and interactivity on fuboTV

FanDuel Group and fuboTV signed an innovative agreement in May to bring horse racing to the vMVPD’s subscribers. The deal makes FanDuel Group the exclusive sportsbook, online casino, horse racing and daily fantasy sports (DFS) partner of the live TV streaming service. Also, FanDuel will be the exclusive advertiser on fuboTV for the categories covered in the agreement.

Intriguingly, FanDuel will be providing data to fuboTV covering, among other things, race odds. It is not clear exactly how this data will be displayed to users but could see fuboTV offering interactive features around the display of the data.