Apple has made a few shows and movies from its premium TV+ app available to watch for free. Though it is a nice gesture, few will notice. As to this being an excellent opportunity for Apple to invest in building up Apple TV+ into a major SVOD force, that time has passed.

On April 9th, Apple made a small selection of Apple TV+ shows available for free for a limited time through the Apple TV+ app. Titles accessible include For All Mankind, 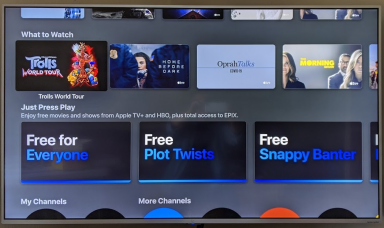 Dickinson, Helpsters, and The Elephant Queen. Many of the most popular titles remain behind the paywall, including The Morning Show, Amazing Stories, See, and Oprah Talks. To watch the free content, you will need a device that supports the Apple TV app. These include Apple devices, Roku, Fire TV, and some Samsung TVs.

There is a host of free content available through the Apple TV app. HBO and AMC, among others, have made some of their content available for free. EPIX has opened its full catalog for viewing without cost. However, the offers are not exclusive to Apple TV and can be accessed through other major streaming platforms.

One of the bonuses of making content available for free by streaming platform providers during these shelter-in-place times is exposure. SLING TV, EPIX, and others are certainly helping entertain people, but they are also exposing them to their services. Some may consider subscribing once the free period is over.

The few shows and movies that Apple is making available don’t have the draw of the films and shows people can watch through HBO, EPIX, and SLING TV. As well, shows like For All Mankind and See are best viewed on a TV. Unfortunately, the Apple TV box is running a distant fourth place in the streaming media player stakes. 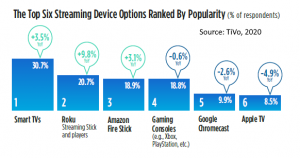 In the U.S. market, Roku and Amazon Fire TV dominate. According to TiVo, a Roku stick or box is used by 21% of consumers and Fire TV by 19%. Apple TV is used by just 9%.  People can use the standalone Apple TV app, but there is little reason to do so. All the features and content offerings available through the Apple TV app are duplicated by native apps on the non-Apple devices upon which it runs on.

In other words, it is doubtful many will even notice the few shows and movies Apple is offering for free.

An opportunity to boost Apple TV+?

Some have suggested that now is an excellent time for Apple to think about boosting the content available through Apple TV+. They believe Apple could fill out the thin content library with licensable Hollywood content. After all, the company has over $200 billion in cash reserves, and that could purchase a lot of quality content.

However, Apple is very unlikely to go on a Hollywood spending spree. It has cultivated an all-original super-premium image for Apple TV+. It’s a pretty good bet that any content that is available to license in Hollywood has already been picked over by other services. What is left is either not exclusive or doesn’t fit the Apple TV+ image.

The time has long passed that Apple’s vast cash reserve could help it establish a major streaming service. The only way to do that now is to buy an established service. (And no, I am not suggesting Apple is about to buy Netflix.)

Apple is making a small number of shows and movies from Apple TV+ free to watch.

Few people will notice the content is available since Apple has minimal reach in the connected TV market.

It also can’t buy its way into the market by licensing lots of Hollywood content since most of the good stuff is already gone.