Facebook video strategy seems all over the place. From the less-than-successful launch of Watch to the constantly evolving content monetization models, confusion is the order of the day. However, the social giant will keep trying new approaches until it gets it right.

It is no secret that Facebook CEO Mark Zuckerberg is placing an increased emphasis on video. His company began focusing on video in 2014. However, in April of 2016, he stepped up the effort, stating that he:

“…wouldn’t be surprised that if you fast-forward five years and most of the content that people see on Facebook and are sharing on a day to day basis is video.”

18 months have passed since then, and Facebook has made some progress with its video efforts. It has prioritized video options such as Live. It has launched a separate YouTube-like tab on its screen that solely focuses on video called ‘Watch.’ It has also spent millions commissioning the production of original programming on the site. Reportedly the company was willing to spend $3 million per episode to some top film and television creators. Facebook also made a concerted effort to roll out higher quality shorter creator videos and increased monetization with mid-roll ads.

So how have these projects panned out?

Recent plans have not been going well

The release of Facebook’s Watch tab certainly garnered much attention from the news media. Some even forecast that it would overtake YouTube as the dominant ad video platform. Since then, Watch’s performance has left a lot to be desired.

Of the 20 shows premiered on Facebook Watch, only a handful have made it to the second season. Some premier episodes attracted spectacular audiences but did not result in consistent viewership. For example, Refinery20’s scripted “Strangers” show reached nearly 9 million views in the first episode. Subsequent episodes have struggled to exceed 200,000 views. Clearly, there is a retention problem. 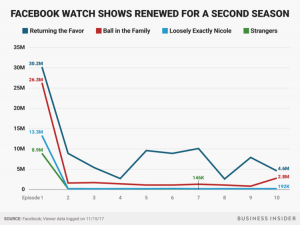 The effort to work with creators to deliver shorter 3-to-8 minute videos including mid-roll ads was also a disappointment. Unfortunately, Facebook did not see good results from these efforts and has now stepped back from boosting their creation. Today, few of the videos uploaded to Watch are monetizable, and most do not feature mid-roll ads.

Publishers are understandably frustrated. One asked when monetization would be turned on for some of its existing independent Watch shows. Facebook responded with “monetization is going to take some time.” Facebook just wasn’t seeing enough demand for the ad space.

One publishing source pointed the finger of blame for the inability to monetize its videos squarely at Facebook:

“The ecosystem they were going to create to make this viable for its media partners and ad clients — it is all predicated on a successful release of an ad product, which clearly has not happened.”

The decision to deprioritize publishers content over user content in users news feeds did not help. It caused the first-ever drop in the number of North American Facebook user accounts. As a result, some celebrities, content creators and companies began to look elsewhere to reach their audience.

With the Watch tab so far proving a disappointment, where is Facebook heading in the future?

It is clear despite the setbacks that Mr. Zuckerberg is committed to video. Facebook is paying its creators to produce premium content as opposed to viral videos, it is possible this will keep users entertained.

Facebook is also trying to crack down on the fake news circulating on the service. One approach taken by the companies is to create a video news channel, despite repeatedly stating that it is not a media company.

Facebook continues to encourage creators to produce short-form videos. Videos such as these are ideal for mobile phones, where Mr. Zuckerberg wishes to remain strong.

Facebook CFO David Wehner has offered his thoughts on the monetization issue. In an interview with Business Insider, he said that Facebook is committed to an ad revenue share model, like YouTube, and not in funding content development like Netflix. However, his statement seems in contrast to previous statements made by Mr. Zuckerberg. Facebook’s CEO has stated that experimenting with long episodic videos will continue. He has emphasized “premium content,” which he believes offers Facebook a shot at the $70 billion television ad market. It would be foolish to think Facebook does not want a piece of that pie.

So, what is Facebook’s video strategy? To date, it is as clear as mud. However, one thing is certain: we are going to see the company try many more approaches and continue to grow as a video site. We can also expect more flops along the way.