FAST services are claiming a significant increase in active users and in revenue brought by the ads they watch. Looking at online video ad revenue forecasts, analysts expect the strong growth to continue.

Over the last several weeks, free ad-supported TV services have revealed details of their users and, in some cases, other data. One word of caution, the numbers discussed here come directly from the companies involved and have not been independently audited.

Tubi says it had more than 20 million monthly active users in May 2019 across the US and Canada. Further, it delivered 94 million hours of content in the same month. In other words, the average user watched 4 hours in the month, or roughly a show or movie per week. Tubi says May delivered the highest monthly revenue ever for the company.

In May, Pluto TV said it had reached 16 million monthly active users, up from 12 million in January when Viacom acquired the company. At the time, Pluto was estimated to have earned $150 million in 2018. Pluto is already expanding outside of the US. It has launched in Germany, the UK, and Austria and plans to enter Latin America soon. 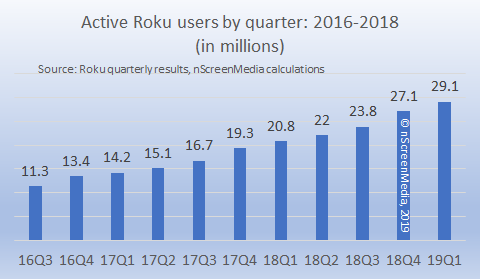 Roku has not made an official statement about the number of users of its ad-supported Roku Channel. However, we can put an upper bound on users. The company says it had 29 million monthly active users of its smart TVs and streaming media players at the end of Q1 2019. Roku Channel users cannot exceed this number because it only became available on non-Roku devices in Q2 2019.

Roku earned $12.58 in average revenue per unit in Q3 2017, the quarter when the Roku Channel launched. Since then, the channel has become the most popular AVOD channel and fifth most popular overall on Roku-powered devices. The Roku Channel is in large part responsible for the growth in ARPU, to $19.06 in Q1 2019. 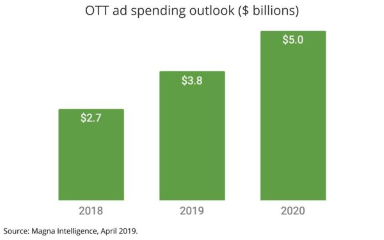 With the rapid expansion in the number of FAST providers and, by their accounts, FAST users, it should come as no surprise that forecasts show strong growth in online video ad spending. Magna Intelligence says that US over-the-top video ad spending will increase from $2.7 billion in 2018 to $3.8 billion this year (up 41%), and $5 billion in 2020 (an annual increase of 32%.)

FAST providers mostly use programmatic platforms to fill their ad slots. However, eMarketers programmatic forecast includes video ads placed in all online platforms, including social media, news, and blog sites, as well as in FAST services.

Forecasters appear to expect the growth to continue. They are expecting the amount of online video ad revenue for OTT providers to double between 2018 and 2020.