According to eMarketer, the number of US OTT video service users will grow 4.6%, to 181M people, this year. By 2019, that number will swell to almost 200M, but looking at other data suggests this estimate could be very conservative.

eMarketer published its first ever forecast for OTT video services this week, and paints a pretty rosy picture for all. The company says that users will grow at a compound annual growth rate (CAGR) of 3% between 2014 and 2019, reaching 199.6 million in 2019.

eMarketer says that an OTT video service is “any app or website that provides streaming video content over the Internet and bypasses traditional distribution.” According to this definition, Netflix and HBO Now are included, because they do not require any pay TV subscriptions to access them. HBO GO and Xfinity GO are not, because a user needs a pay TV subscription to access them. 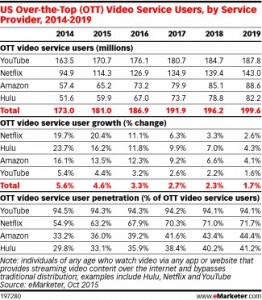 The company then breaks down the growth of four of the biggest video services: Netflix, Hulu, Amazon and YouTube. Of the four, eMarketer says that YouTube will grow the slowest, from 163.5M users in 2014, to 187.8M in 2019, a 3.9% CAGR. With almost all OTT video service users watching at least some YouTube video, the site’s growth is limited to the overall growth of online video viewers.

eMarketer sees the growth of SVOD services as being much stronger than YouTube. Hulu has the highest CAGR, 9.8%, resulting in 82.3M users in 2019. The number of people using Amazon video will grow at 9.1% a year to reach 88.6M. Netflix will be the slowest growing SVOD service (CAGR 8.6%), reaching 143M users in 2019.

According to nScreenMedia data, the growth of Netflix in the US is slowing some. In 2012, subscribers grew 25% over the previous year, whereas growth in 2014 slowed to 17%. However, eMarketer is expecting a dramatic falloff starting next year. The company says the SVOD giant’s growth will fall to 11% in 2016 and taper rapidly to just 2.6% in 2019.

The eMarketer growth projection for Hulu might be conservative. Hulu grew from 6M subscribers in the first quarter of 2014 to 9M in the first quarter of 2015. That’s 50% growth, not the 24% shown by eMarketer. Hulu is also working to capitalize on its more recent TV show catalog by adding an ad free subscription tier and working with pay TV operators to get on the set-top box. All of this could add up to continued robust growth, well above that envisaged by eMarketer.

The growth of Amazon Prime Video also could be higher than eMarketer suggests. Digitalsmiths says that the number of consumers using Amazon video service increased from 14.5% in Q1 2014 to 18.1% one year later. This represents a growth of 25%, while eMarketer estimates 16% growth in 2014. Amazon is investing heavily in original content and is more closely tying its video service to its video devices, like Fire TV and Fire HD tablet. Given the companies enormous marketing muscle, this could help drive growth in excess of the eMarketer estimates.

eMarketer is estimating the number of people using OTT video services will grow at 3% a year for the next 5 years.

A major component of that growth comes from Netflix, Hulu and Amazon.

Considering other data, it looks like eMarketer is underestimating the growth of the OTT video service market.

NBCU’s Peacock a better home for VUDU than Walmart