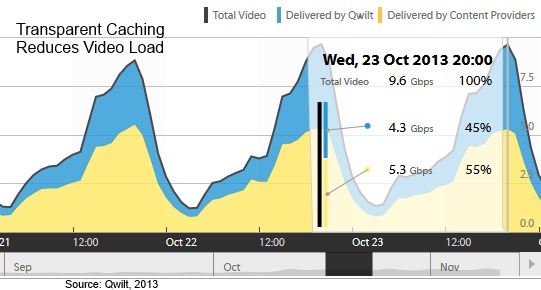 One of the biggest challenges faced by ISPs today is keeping up with the growth in video in their networks. This situation is likely to get much worse as video bandwidth continues to explode. Until recently, ISPs were limited to very costly options to keep pace with demand. Data released today by Qwilt shows there is another, much more cost effective option available.

Qwilt provides products to help manage the explosion of video in ISP networks. The principle tool the company provides is called a transparent cache. This device works invisibly in an operator’s network to store the most popular video content locally, and stream it to consumers from there, rather than from a distant video provider server. The data Qwilt released today shows that transparent caches can have a dramatic impact on the video burden in an operator’s network.

Consider data Qwilt provided from an operator deployment in the U.S. On Wednesday, October 22 2013 at 8PM a total of 9.6 Gbps of bandwidth was consumed by video on the ISP’s network. Of that total, 4.3 Gbps (45%) was delivered by Qwilt transparent caches sitting in the operator’s network and 5.3 Gbps (55%) was coming directly from video provider servers on the Internet.Savings in other markets, like Japan, were even more. Again during primetime, of the total 7 Gbps video bandwidth consumed, 4 Gbps (57%) was delivered by Qwilt transparent caches and 3 Gbps (43%) was coming from the video provider servers directly.Why does it matter if the video comes from transparent caches in a ISPs network versus from the Internet? There are three very important benefits for the ISP. Without transparent cache, virtually all of that video load would be coming across the ISPs Internet tie. Operators must pay for this bandwidth and it can be very expensive.

The second benefit is in video quality. Using transparent caches, the average bitrate delivered to each client is much higher. For example, the company reports Netflix streams served by transparent cache were 2.4 Mbps on average. Streams served by Netflix servers were just 1.3 Mbps. Generally, the higher the stream bitrate delivered, the higher the video quality. In this case, the delivered quality could be the difference between HD and SD picture!Finally, because transparent caches can be located very close to users in the ISP network, the amount of video bandwidth used in the core of the network is much less. This is potentially the biggest saving of all. Upgrades to the core network can be very expensive: avoiding or delaying them can save operators a lot of money.The new Qwilt data suggests that transparent caches can reduce video bandwidth consumed in an ISP’s network while improving video quality delivered to customers. These are early days for transparent caching, so we should treat these results cautiously, but they certainly provide hope that cost effective alternatives to expensive network upgrades exist.To learn more about this important topic you should download the free white paper Handling the Explosion of Online Video: Why Caching is the Key to Containing Costs.Why it matters
Video bandwidth is forecast to grow 2.5 times larger between 2013 and 2017.At the same, consumers increasingly demand better quality from their online video streaming experiences.

ISPs need to find ways to manage the explosion in video bandwidth while minimizing costly network upgrades, and while maintaining or improving video streaming quality.

Early data from Qwilt suggests that transparent caching could be an important tool to help ISPs do this.