The halt in content production comes at a critical juncture for Disney plus. Mounting competition and better Netflix positioning will amplify the lack of new content in the service. Before the end of the year, it could strangle subscriber growth.

When Bob Iger stepped away from his role as CEO at Disney last month, he did so to focus on the creative side of the business. His new job as Executive Chairman allows him to focus squarely on the biggest threat to Disney plus’ future success: new content flow into the service.

The company has 50 scripted and 50 unscripted shows in development. Aside from the usual challenges in managing such a vast development slate, Disney has also struggled with an identity problem. Several shows have been canceled because they didn’t fit with the family-friendly image of the service.

Now, however, Mr. Iger faces a far more significant challenge. The Covid-19 crisis has forced all show development to stop. Moreover, the success or failure of Disney plus is dependent on the delivery of those shows. 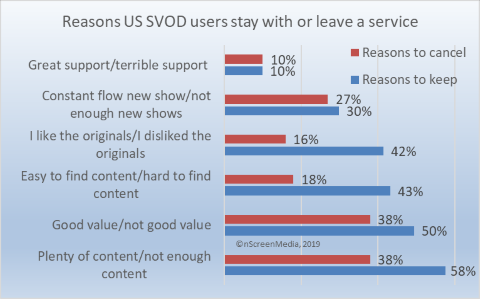 Winning a customer and keeping them requires different approaches. In the U.S., the top reason SVOD users sign up for a service is the correct balance between content availability and cost. Get the balance right, and subscribers think they are getting good value for money. Beyond those factors, subscribers rate ease of finding content and likability of originals as very important and are less concerned with the flow of new content.

New content flow is critical to customer retention. Subscribers say the balance between content availability and cost went awry for a service they had canceled. They cited the lack of new content as a crucial factor in canceling and were far less concerned with ease of use and originals.

In other words, new content flow is critically important in retaining customers.

Disney plus safe, for now

Disney plus has gotten the balance between content availability and cost right. You don’t get 28 million subscribers in the first few months of availability without compelling content offered at the right price. However, the lack of new shows could upset the balance leading to a wave of cancelations. Other market factors will exacerbate the problem.

Disney plus faces increased competition from new services, including HBO MAX, Peacock, and Quibi. These new services will bring to market a substantial set of new content precisely when Disney plus can offer nothing new.

If the production stoppage goes on for too long, it could still be an issue for Disney later in the year. All those people that signed up for an annual membership late last year could be feeling cheated when their renewal comes around later in 2020.

The content production stoppage doesn’t seem to be nearly as big a problem for Netflix.

Netflix in a stronger position

According to Ted Sarandos, Netflix’s head of content, the service has seen a surge in viewing in the last couple of weeks as people spend all their time at home. As with everyone in the entertainment business, production has ground to halt:

“It’s been a massive disruption. Every one of our productions around the world are shut down.

However, the production shutdown won’t affect the flow of new content into the service in the short-term:

“What’s happening now is we work pretty far ahead with delivering all the episodes of our shows at once so no disruption over the next few months, maybe later in the year as physical production is not operational.”

For now, the company can continue to drop 35 new shows into the service every week. What’s more, if the need arises, it can slow the pace a little to buy more time.

Disney plus long-term health in jeopardy

In the short-term, Disney plus should continue to grow subscribers strongly. The European launch starts on April 1st. With the aggressive price, impressive library, and millions shut up in their homes looking for distraction; the attractive value proposition should deliver impressive customer sign-ups.

However, the International launch could mask retention problems in the U.S. as the lack of new content begins to take its toll. And the longer Disney plus delays opening the spigot on new content delivery, the further the impact will spread. Unfortunately, there is little Mr. Iger can do about it for now.

Show and movie production has been halted due to the Covid-19 virus emergency.

It comes at a bad time for Disney plus. The service had 100 shows in production and needs them to keep existing subscribers happy.

Netflix can continue to deliver 35 new shows a week for some time before the production stoppage impacts its business.

‘Originals’ image keeps Netflix tops through 2025 in the U.S.