nScreenNoise – Dish Network between a rock and hard place

As quarters go, Q2 wasn’t a bad one for Dish. It lost just 196,000 subscribers. But revenue and average revenue per subscriber are both falling. Here’s why. 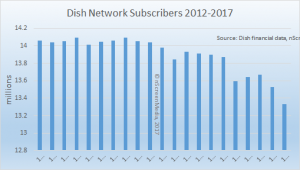 Dish Network lost 196,000 subscribers in Q2 2017. This an improvement on Q2 2016 when it lost 222K. Monthly churn also improved, falling from 1.96% per month in Q2 2016 to 1.59% last quarter. The satellite subscriber losses were likely much higher. Dish Sling TV numbers in its overall results. Estimates put Sling TV subscribers at around 2M.

In some ways, Sling TV is beginning to adversely affect Dish Networks performance numbers. There are other big factors involved as well. 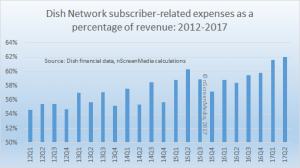 This is a huge reduction in margins few other businesses could withstand.

The amount customers are spending with Dish is also falling. ARPU (average revenue per unit) was down 3% YoY, to $87.25 a month. There are two main reasons ARPU is falling at Dish:

Since Sling subs are included with satellite, the lower Sling ARPU will depress the overall Dish ARPU.

The dynamics of vMVPD businesses are very different to traditional pay TV. For example, there are no real capital expenditure (capex) costs, and operational expenses (opex) are much less. Subscriber acquisition costs (SAC) are much lower for vMVPDs like Sling because there is no equipment to install in the customer’s home. Dish SAC is near $700, while Sling TVs is more likely in the $20-30 range.

Finally, margins in online businesses such as Sling TV are much thinner than traditional pay TV.

This is a difficult position for Dish Network. If it includes Sling TV in the overall results, subscriber losses don’t look as bad as they otherwise would. However, financial measures such as revenue and ARPU look worse.

That’s why Dish Network finds itself between a rock and hard place.