Discovery will launch a new global SVOD service in 2020 powered by a new agreement with the BBC. The deal gives Discovery exclusive access to marque natural history programming. However, pricing for the service is likely to be heavily constrained by existing competition.

Discovery and the BBC partner worldwide

The BBC continues to innovate its approach to content distribution with another public-private partnership. The British public broadcaster is partnering in the US and UK with commercial rival ITV on the Britbox SVOD service. It has now reinvigorated a relationship with Discovery, with whom it worked in the creation and distribution of Frozen Planet and Blue Planet.

The new ten-year agreement makes Discovery the exclusive SVOD home for BBC natural history series such as Blue Planet, Life, and Planet Earth outside of the UK, Ireland and China. The agreement also covers future series from BBC Studios and hundreds of hours of factual programming from the BBC library. As well, the BBC and Discovery will jointly fund a dedicated team within BBC Studios to create new high-quality wildlife series.

Discovery plans to use the BBC content to help launch a global SVOD service targeted for release in 2020. 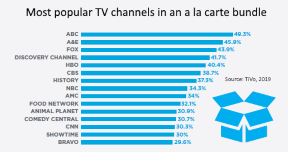 Factual programming, particularly focused on the natural world, has remained very popular with viewers. Discovery channel has been in the top 10 TV channels for at least a decade in the US and remains popular today. TiVo asked consumers to pick the ideal channels in their TV bundle in Q4 2018. Discovery Channel was the fourth most popular choice, chosen by 42% of respondents. Animal Planet was the 11th most popular choice, with 31% selecting it.

The TiVo data emphasizes just how durable factual programming and natural history shows are in the market for video. It also helps explain why it is becoming one of the most competitive spaces in direct-to-consumer services.

Discovery will go up against some big competition with its 2020 service. Netflix is very active in the Natural History genre. It is just about to release Our Planet, featuring Britain’s own Sir David Attenborough. It also has other BBC productions, like Blue Planet II. However, the BBC is beginning to move away from working with Netflix. It is removing many titles from the service including David Attenborough’s Natural Curiosities and The Bear Family and Me.

CuriosityStream is also very active in the factual genre. In addition to plenty of natural history shows, it has a deep catalog of content in subgenres like science, history, and technology. The company also introduced a new “pricing for the planet” strategy by cutting the cost of a subscription to an aggressive $2.99/month. It also took $140 million in new funding to help finance, among other things, a global expansion.

Making money will be tough

Competing with CuriosityStream on price will be tough for Discovery. To be sure, the BBC content the 2020 service will deliver should make it a formidable competitor in the market. However, it will still be heavily constrained in how much it can charge. Referring to the TiVo data on favorite channels, the company also asked how much people would be prepared to pay for each of the channels they selected. The highest price was for niche channel Revolt, at $3.75 a month. In other words, CuriosityStream is much closer to what people say they are willing to pay for this type of content.

The Discovery deal with the BBC for natural history shows illustrates the trend.