Like Comcast, which will announce results on Thursday, AT&T has switched their pay TV focus from maximizing subscribers to maximizing profit. In practical terms, that means when a customer calls to try and get a better deal, they will be out of luck. If that means the customer leaves, so be it. 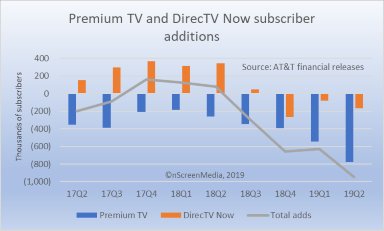 The strategy shift has caused a sizable acceleration of subscriber losses. In the second quarter, AT&T’s premium TV offerings – DirecTV and AT&T U-Verse TV – lost 778,000 subscribers, down 3.3% on the quarter. DirecTV Now lost 168,000, down 11%. Overall, the MVPD business shed almost a million subscribers in the quarter and 1.6 million in the first half of 2019, twice as many losses as in the whole of 2018.

The new policy seems to be having a desirable effect on profitability. Though there were no price increases in Q2, average revenue per customer for premium TV increased 2%, to $117.49 a month. However, the increase in per-customer revenue was nowhere near enough to offset the loss of subscribers. Video entertainment revenue declined slightly from the first quarter and is down $1 billion over the same quarter last year.

The video future is HBO Max, AT&T TV, and DirecTV

The first is, of course, DirecTV. The company sees it as having a “really long life,” and a premium price profile. However, with TV channels from CBS and Nexstar vanishing from the service due to ongoing carriage disputes, perhaps DirecTV’s useful lifetime might not be quite as long as the company would like.

The company previously announced AT&T TV would be a “thin client” version of DirecTV. A customer gets a USB dongle, hooks it up to broadband, and starts watching. Randall Stephenson, Chairman, CEO, and President of AT&T described the ethos behind it like this:

“We’ve got to find a way to get the cost curve down on these products, so we can keep people into the product for a longer-term basis. So, as you drive customer acquisition costs in half on AT&T TV, the new product we’ll bring into market, then you can bring the price points down and hold margins and still have the same value equation from a customer standpoint.”

The company will start beta testing AT&T TV this summer, rolling out more broadly later this year. Look for pricing to start in the $60-$80 range.

The third service appears to be the lynchpin of the company’s video strategy. HBO Max, which will launch in the Spring of 2020, will surround HBO content with movies and shows from WarnerMedia brands Turner and Warner Bros. However, it will not duplicate Netflix strategy, at least not for content. The company revealed that there would be a live component of the service. It plans to add live sports leveraging Turner contracts for MLB, NBA, and NCAA Basketball. Mr. Stephenson says there will also be a strong news component of the new service.

HBO Max will be sharply differentiated from Netflix and Disney+ since neither competitor includes news and live sports. However, it’s not clear if the live components will be enough to justify the significantly higher price – $15 to $20 a month – the company is likely to ask.

What about DirecTV Now?

DirecTV Now was conspicuously absent from any discussion of video services. The company has said multiple times it considers the service to have too many channels. It has cut channels, ended sign-up offers, and increased prices to try and make it profitable. However, even with all those changes, it still overlaps AT&T TV. Expect AT&T to phase DirecTV Now out and try and convert customers to AT&T TV once it is launched.

AT&T has a three-pronged strategy for video services.

DirecTV is the Cadillac product, though the subscriber-base is falling fast.

AT&T TV is a broadband version of DirecTV which cuts out much of high subscriber acquisition costs of satellite TV. It likely will replace DirecTV Now over the next year or so.

HBO Max is a blend of premium entertainment content and live sports and news and is the primary OTT service competing alongside Disney+ and Netflix.