The new TiVo Video Trends Report for Q2 2019 has some surprising findings. The company says we are juggling seven services and using vMVPDs less than last year. It also reports we are watching digital native ad-supported sites more and TV sites less.

We are juggling seven services 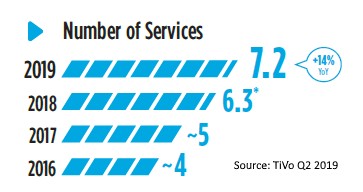 According to TiVo, the average survey participant uses 7.2 services, up from 6.3 in 2018. When it comes to finding something to watch, however, people think about these sites quite differently.

39% use Netflix to look for new movies and shows, while 27% do the same with pay-tv, and 26% with Amazon Prime Video. When it comes to new episodes of a regularly watch series, pay-tv is used by 40% and Netflix by 19%. Finally, for rewatching movies and TV shows already seen, most people (18%) said they turn to YouTube.

One bright spot in the report is the growth in free and ad-supported linear online services. I have discussed the claims and counterclaims about the number of monthly active users (MAUs) free linear sites like Pluto TV and Tubi TV attract. Pluto TV says it has 18 million and Tubi says it has 20 million. 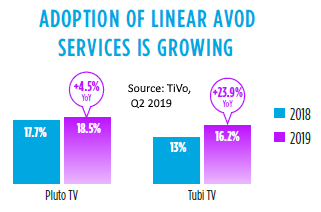 TiVo says that Pluto TV is in the lead. 18.5% of survey respondents say they use the site, while 16.2% say they use Tubi. However, Tubi users are growing faster than Pluto TV, up 24% year-over-year (YoY) versus 4.5% for Pluto TV.

TV network sites and apps seem to be on the downward curve their TV channels. TiVo reports on five top sites, and all of them say big user declines over the last year. For example, 9.3% said they used ABC sites and apps, down from 10.4% last year. Cartoon Network saw an even more significant decline, from 7.7% to 4.8%.

TiVo data shows that the number of people saying they use a vMVPD fell for all the primary services. For example, Hulu with Live declined from 6.9% to 6.7%, DirecTV Now (recently renamed AT&T TV Now) fell from 6.3% to 4.1%, and Sling TV fell from 3.2% to 3% between 2018 and 2019. However, this data seems at odds with subscriber growth numbers.

How can TiVo data say vMVPD users are falling while subscriber numbers continue to grow? It’s hard to know for sure. However, all the vMVPDs allow multiple family members to use the subscription. It could be that some family members tried using the vMVPD subscription for a while and simply stopped later.

One note about YouTube TV. TiVo says 8.5% say they use it when there are reportedly only 1 million subscribers. Two things could be making the number of users wildly different from the number of subscribers. Firstly, survey participants may confuse YouTube and YouTube TV. Secondly, YouTube TV allows five family members to share the subscription.

As usual, there are lots more interesting data in the report which can be downloaded free from TiVo’s website.

All video services are not created equal. We use different services for different jobs.

vMVPD use is in question as subscriber growth slows and users fall.