With three-quarters of U.S. TV viewers using at least one of the big three SVOD services, there is a danger smaller providers will be crowded out. Luckily, there is a distribution partner that can help them be heard and solve other challenges too.

It is harder than ever to be heard

Shelter-in-place viewers have created a surge in streaming never seen before. The NPD Group reports that there has been a 72% increase in Netflix subscriber profiles used to stream. It also says that Netflix users in areas such as New York, New Jersey, and Connecticut are watching 37% more than before the COVID-19 emergency. 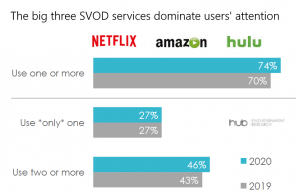 Unfortunately, much of the increase in viewers and usage could be accruing to the most significant providers. Hub Entertainment Research reports that 74% of U.S. TV viewers use one or more of the big three – Netflix, Amazon Prime Video, or Hulu. The company says that almost half use two or more.

It could be getting even harder for smaller providers to heard by their intended audience. Disney is putting the full might of its marketing behind its new direct-to-consumer (D2C) service Disney+. Others will soon join it, including NBCU promoting Peacock when it launches nationally in July and HBO Max, which debuts later this month.

Being heard above the din of other, larger, online TV services is one of the biggest problems faced by D2C providers, according to a new free white paper by nScreenMedia. In D2C is Not Enough: How pay TV can help drive SVOD/AVOD success, service providers discuss five significant challenges they face and how pay TV operators are helping overcome them. 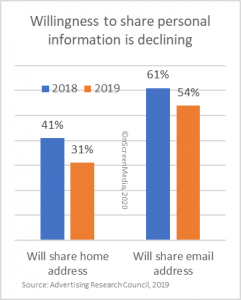 Another significant barrier to signing up a consumer, even for a free trial, is getting them passed the registration screen. The Advertising Research Foundation found that the number of people willing to share something as basic as a home address fell from 41% in 2018 to 31% in 2019. Willingness to share an email address also fell from 61% to 54%.8 Consumers have good reason to be wary. The number of sensitive consumer records exposed in 2018 increased 128% over 2017, to reach 447 million.

However, making a D2C service available on a pay TV operator’s set-top box reduces the signup problem to a single click with the TV remote. The pay TV operator already has a billing relationship with its subscribers. When a consumer decides they want to gain access to a D2C service via the operator’s set-top box, there is no need to enter any billing or personal data. A simple one-click confirmation is all that is necessary. Clint Stinchcomb, President, and CEO of CuriosityStream refers to techniques such as one-click signup as a distinct advantage offered by working with pay TV operators:

“It’s what we refer to here as friction minimization. The operators have multiple touchpoints, and it is considerably easier for them to sign people up. It’s because of the presence they have.”

Mr. Stinchcomb has gone further, making the barrier completely invisible to some operator customers. CuriosityStream has partnered with Altice in the U.S. so that when a customer is at home on their broadband network, they can immediately watch CuriosityStream content on their devices with no login required.

nScreenMedia spoke with executives from D2C providers to understand how they are coping with these challenges and how pay TV operators are helping them to energize their growth. Download your free copy today.