New comScore data shows one-third of TV streamers are cordless. It also shows that cordless Amazon Video users watch 13% more than Netflix users. The difference is all in their content strategies.

According to comScore, one-third of households streaming to the television are cordless. The other two-thirds have either cable, satellite, or telco pay TV services. The cordless group is broken into two broad categories: those that had pay TV and got rid of it (18%) and those that have never had pay TV (14%.)

Hulu has the highest percentage of cordless subscribers of the top four online video services. Hulu subscribers make up almost half of those without pay TV. 41% of YouTube users are cordless, and 37% of Netflix and Amazon Prime Video are cordless. 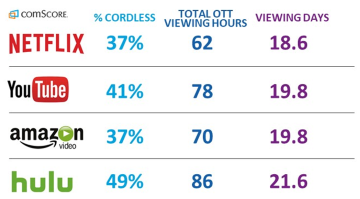 The comScore data could suggest that, though the cordless group rejects pay TV, they are not rejecting traditional television. They will continue to hear about great TV shows through the social and traditional media and around the water cooler. Moreover, when they hear about a great show, the place they are most likely to find it online is Hulu.

Another interesting question is why those cordless TV streamers using Amazon watch significantly more (12%) than those using Netflix. This fact is particularly interesting given there is a large overlap between the two groups.

The viewing difference stems from the different content business models used by both companies. Amazon provides a far greater variety of content than Netflix because it resells other SVOD services through its Channels program. It also rents and sells movies through the Prime Video app. According to Ampere Analysis, consumers could access 26,000 distinct movie and TV show titles through Amazon Prime Video as of February 2017.*

By contrast, Netflix is focusing heavily on building its library of original content and relying much less on licensing content from third parties. Its library size stood at just under 5000 as of February 2017. Moreover, Netflix is focusing on newer titles rather than older. Ampere Analysis says there has been a 1,102% increase in titles two years old or younger, and a 60% decrease in titles 5+ years old.

It could be that cordless Amazon customers are using Prime Video as an aggregation point for many of their viewing needs, not just to watch shows and movies available for free to Prime members. Netflix is nonetheless valuable to them, but there just isn’t as much content they like to watch available through the service.

One-third of the people streaming to the television does not have traditional pay TV.

Of that group, those using Hulu stream the most content overall.

Cordless Amazon Prime Video users stream 12% more video than Netflix, likely because they are using Amazon as an integration point for many of their SVOD services.

Europe could overhaul U.S. as Netflix most significant region