Connected TV just a normal part of the US home

Connected TV penetration is up, usage is way up, and viewing through Roku dominates the consumption in homes that have one. Has the connected TV become part of the status quo?

Connected TV in the broadband home is the norm

Parks Associates says that over half of the almost 100M US broadband homes watch Internet video on a television.

The company also found that 49% of those broadband homes subscribe to Netflix. (Netflix says it has 51M US subscribers.) Parks also says 72% of cord-cutters and cord-nevers have subscribed to an online video service and view it as their primary video source. 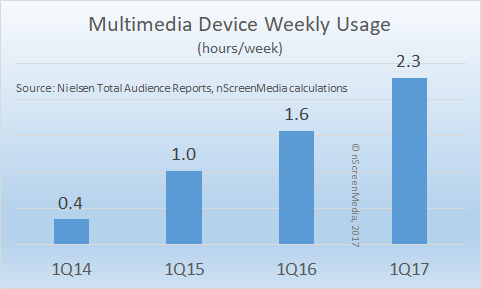 However, that is usage averaged over all households. Looking just at the homes with a connected TV installed, usage is much higher.

Nielsen’s Comparable Metrix report for Q4 2016 says that penetration of connected televisions was 44.3% in that quarter. The average adult connected TV user watched 8 hours and 45 minutes per week, or 1 hour and 15 minutes per day. New data from Roku shows usage is even higher than that in some homes.

Roku has been on a bit of roll lately. comScore reported last month that Roku was the leading streaming media player used in Wi-Fi households. The company’s devices are used in 16% of homes, versus 14% for Amazon Fire TV, 8% for Chromecast, and 6% for Apple TV.

Half of broadband homes watch Internet video on their connected television.

The average person watches 2 hours and 18 minutes a week on their streaming media player.

Roku reports their users streamed media through their device for 2-and-three-quarter hours per day in the first half of 2017.

* Streaming media players are referred to as multimedia devices in Nielsen reports.

^The company stresses monthly active users is not the same as devices sold. It is simply the number of Roku devices used in the month and includes Roku-powered TVs, set-top boxes, and streaming sticks.