According to new Conviva data, streaming video hours viewed increased 72% in the last year and growth is accelerating. The connected TV is a key driver of the trend while sports tests streaming’s limits.

The Conviva data shows very strong growth in viewing hours over the last year. Overall, the number of hours viewed grew by 72% from Q1 2018. What’s more, the growth rate is accelerating. The 72% growth is 49% higher than in the same quarter last year. 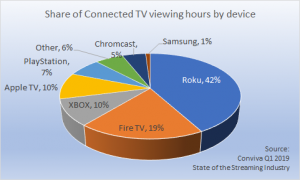 Of all the screens through which people watch connected TV is the one most preferred. The TV received 56% of streaming hours; mobile devices received 23% and the PC 14%.

A sure sign that more people are relying on online TV services for all their video needs is the strong growth in the number of people watching a live event at the same time (so-called, concurrent streamers.) Conviva says that in Q1 2019 the average daily peak was 76% higher than in the same period last year. The peak number of concurrent streams for the quarter did not come in the moribund Super Bowl, but in the College Football National Championship between Clemson and Alabama. The peak was 38% higher than the peak in 2018.

Seeing the peak current users during a college football game makes a lot of sense. The audience skews much younger, in the 18-24-year-olds. In the broader 18-34-year-old age group, people watch much less traditional television than older people and usage is declining fast. According to Nielsen, in Q3 2018 18-34s watched a third of the television watched by 50-64-year-olds and under a quarter of that watched by the 65+ viewer. What’s more, 18-34s watched 17% less traditional TV than the previous year.

The balance between live and on-demand consumption shifted over the last year. Conviva says there was a strong shift toward live consumption on mobile. Live’s share of mobile viewing hours increased from 29% to 36%. On the connected TV, live streaming’s share ticked down a percent to 38%.

The company also notes that vMVPDs like Sling TV, Hulu Live, and YouTube TV are doing a better job than on-demand providers with quality. For example, buffering rates were 0.26% versus 0.7% for on-demand, and video start failures were 0.68% versus 1.88% for on-demand.

There has been strong growth in the amount of video streaming over the last year.

Despite the increase in demand, publishers have managed to increase quality.

The connected TV continues to be the preferred screen for watching streaming video.