The drive to connect the television to the Internet is now in full swing. Sales of smart TVs, game consoles, disk players, and streaming media players are all forecast to do well this holiday season, but which will consumers really use?

According to The NPD Group, there will be 153 million installed and internet-connected TV devices in the US by the end of 2015, which translates to about half of Internet homes owning at least one of the devices. This, the company says, is expected to grow to 231 million devices over the next three years. Over the holiday season, the CTA says connected TV devices are among the most popular items consumers expect to purchase. 22% say they will get a game console, 17% a television (of which many will have Internet capabilities built in,) and 16% a streaming media player.

Strategy Analytics says that there were 53 million connected TV devices shipped in Q3 2015, and that sales will reach over 220 million for the full year. That is roughly equivalent to the number of television sets that will be sold, since 2014 worldwide TV sales amounted to 235 million.

Smart TVs are certainly driving the rollout of connected TV. Virtually all of the 30 million 4K TVs shipped through 2015, and many of the HD TVs, include Internet functionality. However, it’s not clear exactly how many of them are used to watch video from the Internet on a regular basis. That cannot be said, however, for streaming media players (SMPs), since bringing Internet to the television is their primary function. Strategy Analytics says that 17%, or 9.2 million, of connected TV devices shipped in Q3 2015 were streaming media players. 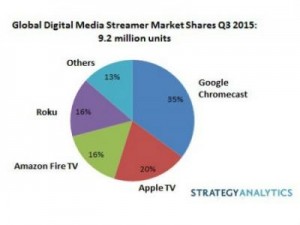 Leading SMP sales was the cheapest of the mainstream devices, Chromecast. Strategy Analytics says the $35 Chromecast had a 35% share of all SMPs shipped. Apple TV was second with 20% and Roku and Amazon Fire TV both garnered 16% each. These shares could shift significantly in Q4 as all of the top devices released new versions in Q3. Roku and Amazon shipped new 4K ready SMPs, Apple released the first major hardware and software upgrade for Apple TV in three years, and Google gave Chromecast a design overhaul.

Is all of this activity finally beginning to make an impression on streaming video service usage? Certainly, there was little sign in 2014 that many people were using their connected TVs. Most of the streaming activity was to PCs, tablets and smartphones. However, signs are the connected TV is beginning to catch on with consumers.

Consumers have begun to embrace the connected TV.

They will buy as many connected TV devices as televisions in 2015.

Though smart TVs will be the most common connected TV device in consumer homes, they may not be the most frequently used.

Streaming media players are also selling well and, since they are dedicated to streaming video consumption, are more likely to be used for that function than other connected TV devices.