Can anyone compete with the Amazon Streaming Partners Program?

Amazon’s Streaming Partners Program (SPP) is beginning to look like a stroke of genius. If you’re a smaller SVOD provider it just makes sense to participate. If successful, it will place a lot more power in the hands of the already dominant etailer. Is there any other company that can give Amazon a run for its money? 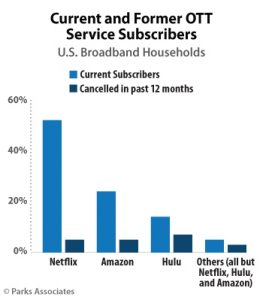 Getting visibility for an SVOD service is a struggle for smaller providers. If a service’s icon is below the fold (a user needs to page down to see it) on a device, chances are people just won’t find it. According to Parks Associates 95% of SVOD customers in the US accrue to the top three providers; Netflix, Hulu and Amazon Prime Video.

Unfortunately, that is not the worst of it. According to Paywizard, it is tough for smaller providers to hang on to subscribers for any length of time. In its survey of 6 countries, the company found that consumers use smaller SVOD services very differently to the big 3. People are very comfortable subscribing for a short while, watching the specific shows of interest, and then unsubscribing again (so-called, dip-in-dip-out behavior.)

Amazon’s SPP solves both these problems.  The intense marketing that Amazon can deliver helps people find a service, and helps remind them that the service is still there if they unsubscribe. It does this in two ways: 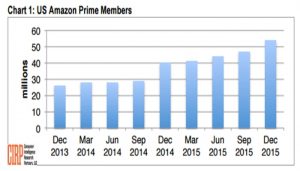 Given that Amazon Prime has 56 million members, half of which use Prime Video, the etailer has the power to market directly to half of homes in America.

It can also simplify the process for getting a direct-to-consumer service online. The company offers integrated billing services, so a consumer does not have to enter credit card details when subscribing to a new service: one click gets a user signed up. It can also provide hosting and delivery through Amazon Web Services.

This places enormous power in the hands of Amazon, as consumers increasingly look to online for their video entertainment. Are there other companies that could provide a similar lift to smaller SVOD services?

The most obvious candidate is Netflix. It is the most used SVOD service in America, with 47 million subscribers. Not only that, it can offer a world market since it now has services in virtually every country. It could also match Amazon’s billing services and even provide distribution through its OpenConnect CDN. And, unlike Amazon, Netflix client is on just about every connected device on the planet.

Despite these huge advantages, reselling other SVOD services does not seem to be a very good fit for Netflix. Its marketing is focused exclusively around getting people to subscribe to the video service, and getting them to watch the content. Consumers simply aren’t used to seeing ads and recommendations from the company for other services. Furthermore, one of the biggest value propositions the company offers is the total absence of advertising.

The other obvious candidate to go up against Amazon’s SPP approach is the pay TV operator. I have been urging them to do exactly that for quite a while. On masse, the operators can reach twice as many homes as Amazon does. They can match or exceed Amazon’s marketing abilities, with in-guide placement, search integration, and even deliver bill stuffers for those that still receive paper bills. Further, consumers expect their operator to provider marketing to them, with smart bundles and free trials of premium services like HBO and Showtime. They already provide billing services for premium channels. The only thing they can’t offer is countrywide distribution services.

As Amazon’s SPP emerges as one of the biggest threats to the pay TV model, operators are also best placed to provide credible competition to it. It is exactly what pay TV companies have been doing for decades: helping connect consumers to content they ordinarily wouldn’t be able to find. The only question is, do they have the will and wherewithal to bring that approach to the world of online video?

It supplies them with marketing to a huge potential audience, billing services, and distribution.

Pay TV operators, who are the most threatened by Amazon’s SPP, could also provide the same or better benefits to smaller SVOD services as Amazon. The only question is, are they willing to try it.