While 2018 saw a continued decline to Comcast’s pay TV cable business, it has begun to evolve its video strategy outside of the traditional bundle. Direct-to-consumer services and SVOD aggregation are key.

Comcast made a spectacular recovery from years of video decline in 2016, spurred on by the success of its X1 pay TV service. 2018 shows the recovery was a temporary blip. The company lost subscribers in every quarter of last year, the first time this happened since 2012. In total, the video customers declined 371,000, or 1.7%. 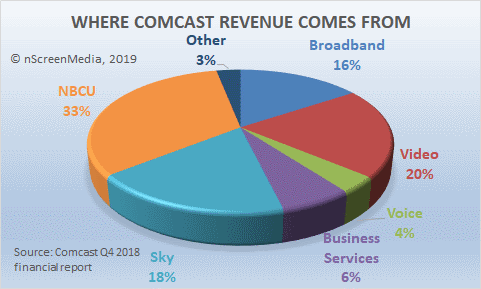 As far as Comcast’s video business is concerned, the company seems to have accepted the inevitable, that the business is in long-term decline. David Watson, head of Comcast Cable, says the company is focusing on its most profitable customers, apparently content to let those paying less leave if they like. It’s not clear this strategy is working. 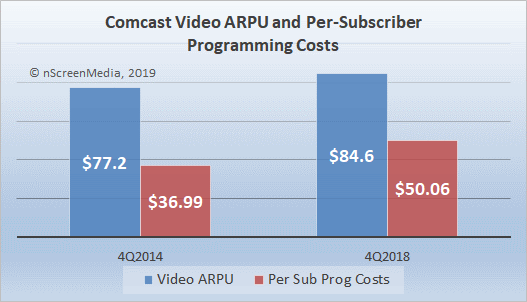 Video ARPU, which measures the average revenue paid by video subscribers, is falling. It peaked in Q3 2017 at $85.8 per month and had fallen to $84.6 in Q4 2018. Were Mr. Watson succeeding in retaining the most profitable video customers, ARPU would increase as less profitable ones leave.

The other strategy Comcast is employing is to aggregate SVOD providers into the X1 service. The company launched Amazon Prime Video at the end of 2018, the first pay TV operator to do so. The service joins Netflix, CuriosityStream, YouTube, and others. The aggregation strategy makes accessing and managing SVOD subscriptions easier for X1 customers. The hope is that providing a single access point for all services will be enough to keep X1 customers loyal to the service.

Bringing SVOD services into the X1 bundle has another potential benefit. Comcast must pay carriage fees to programmers to carry their channels. However, Comcast pays no licensing fees for SVOD services and may make a small amount of money for support services like billing and marketing. One of the analysts on the earnings call hinted at this dynamic transforming the costs of the pay TV bundle. Mr. Watson agreed with the comment saying, “I think it’s a very good point, and we look at it that way.”

NBCU announced it would launch a direct-to-consumer (DTC) service in 2020. The as-yet-unnamed service will draw heavily on NBCU assets and be available free to pay TV customers. In the earnings call, Steve Burke, Head of NBCU, said the service would also be available for free to Sky video customers. Non-pay TV customers will be able to subscribe for a fee, which Mr. Burke says will be competitive with other SVOD.

Mr. Burke says the big benefit to NBCU will be incremental ad revenue:

The service will be launched using technology developed by Sky for the company’s Now TV DTC service.

The other benefit to NBCU is that the service helps anchor people to their pay TV subscription. In other words, it helps protect the $23 billion in annual revenue earned by the company’s cable and broadcast businesses.

Mr. Burke also plans to roll the new DTC service out to other markets. He plans to take a market-by-market approach to how he does this:

“There will be countries where we launch SVOD only, countries that don’t have the kind of advertising ecosystem that we have in United States or in parts of Europe. There will be places where we have different strategies. And obviously, our – the rights we have, the shows we have will vary by country.”

Perhaps the clearest sign that Comcast has switched internal priorities away from video came in a seemingly trivial change. Each quarter, the company reports on the performance of each of its businesses. Video business performance has always been the first row in results tables and spreadsheets for the cable business. For Q4 2018, for the first time, Internet business performance is listed first, above video.

Rather than fight for every video subscriber, Comcast has decided to let the least profitable customers leave.

Comcast is also increasing the benefits of being a pay TV customer by launching a direct-to-consumer video service in 2020 that is free to them.