According to The [TV] Viewership Report from Comcast Spotlight, the cable company’s video customers are bucking the prevailing trends. They are watching more TV, more channels, and more VOD than ever. But are they so different from everyone else? 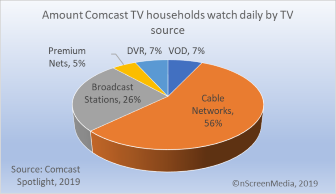 Why the significant increase in TV viewing during Q1 2019? Comcast lost 2% of its video subscribers between Q1 2018 and 2019. At the beginning of the year, Comcast instituted a new strategy focusing on the highest value customers. Now, when a customer calls to get a better deal on their package, Comcast is likely to say no. The net effect of the strategy is that big TV users are more likely to stay, and light users are more likely to leave. If lighter users of the service leave, the average viewing time of the remainder rises, even though they are watching the same.

Regardless of the trends within Comcast’s pay TV population, the overall TV viewing trend is down. According to Nielsen data, the average adult watched a total of 4 hours and 27 minutes of live plus time-shifted TV per day in Q1 2019, a decline of 7% over the same quarter in 2018.

Does this mean Comcast TV users watch more channels than the average? Not necessarily. The basis for the Comcast and Nielsen data is different. The Comcast data refers to households and counts every channel tuned in the whole of the first quarter. The Nielsen number relates to individuals and on a weekly basis. There are, on average, 2.5 people per household in the U.S. To be sure, many of the channels that people in a household watch are the same, but many are not. For example, if half the channels watched are common, about 30 channels would be tuned per week. In a month, the number could quickly rise to 34 or more.

In other words, Comcast TV homes may not be tuning many more channels than subscribers to other pay TV providers.

Comcast customers are behind the curve for on-demand viewing

Comcast says there has been a tremendous shift toward OnDemand viewing. In the last year, daily time spent has increased by 35%, to 27 minutes per day per household. At the same time, DVR use inched up a mere 3%, to 26 minutes per day.

The Comcast data suggests pay TV subscribers could be watching the same amount or more on-demand content through SVOD. 70% of US homes have SVOD, and Netflix reports that the average household streams 1 hour and 11 minutes per day. As well, Roku users stream almost 200 minutes per day.

The new Comcast Spotlight TV Viewership report has bold claims about the attractiveness of the company’s video subscribers to advertisers.

However, a more in-depth look at the numbers shows Comcast video customers aren’t that different from everyone else.