Last year, I talked about why we cannot compare monthly active user claims by free ad-supported TV providers. One big reason is the impact of family viewing. Though at one time we thought family viewing was dying, the connected TV is proving we still want to watch together. And family viewing can have a massive impact on the calculation of MAU.

Family viewing is not dead!

Seven years ago, one of the early observations about online viewing habits was that people primarily watched alone. I, and many others, wondered if we were witnessing the death of family viewing. After all, everyone has their personal viewing device, and services were beginning to appear to cater to every taste. Wouldn’t it make sense that viewers would opt to watch what they wanted rather than compromise and watch with someone else?

The missing piece of the puzzle in 2013 was the connected TV (CTV,) which few homes had back then. Without it, few people wanted to watch on a smartphone, computer, or tablet with another family member. Data from Nielsen in 2017 shows the impact CTV has on family viewing (or ‘co-viewing’ 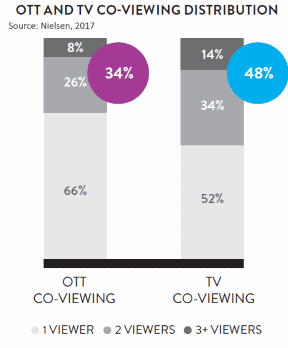 as Nielsen calls it.)

Nielsen found that more co-viewing takes place during primetime. It also found that co-viewing is highest for children’s shows and general variety programming and lowest for science fiction and sports commentary.

Some of the free ad-supported TV (FAST) providers have been touting how many monthly active users (MAUs) they have. I have warned that it is dangerous to directly compare these claims because we cannot be sure how each company is measuring monthly active users. To illustrate how important knowing the basis of the claimed number is, let’s look at the impact of co-viewing.

According to the latest claim from Pluto TV, the company now has 22 million MAUs. I was talking with Tom Ryan, the CEO of the company, at the DEW conference in LA last month, and he assured me that Pluto TV does not include any multiple for co-viewing. What would the number of MAUs be if the company did include it? Nielsen’s data says 26% of viewing is with two people, and 8% of viewing is with three or people. In other words, 100 Pluto TV active users reach about 150 people.

In other words, including a co-viewing multiple of 1.5 gives Pluto TV over 33 million MAUs.

Of course, I don’t know if Tubi is including co-viewing and if they are, I don’t know what multiple they are using. The point is; because we don’t know we cannot compare Tubi and Pluto TV based on their stated MAUs.

Advertisers need to know the basis of MAU claims

For an advertiser, the difference is critical. In the example above, an advertiser could be reaching 50% fewer people than they expect if they take the MAU claims at face value. What’s more, co-viewing varies by age. For example, 30% of CTV usage among 25 to 29-year-olds is co-viewing, while it is nearly 40% among 45 to 49-year-olds.