Pluto TV and CBS All Access have both enjoyed 50+% growth over the last year. ViacomCBS is beefing up All Access as it heads towards a relaunch and rebrand of the next-generation platform. Cooperation between Pluto TV and All Access: TNG will tighten as each can help the other grow faster. 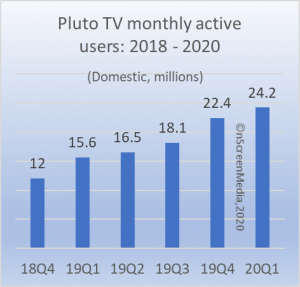 When Viacom purchased Pluto TV for $340 million at the beginning of 2019, it had 12 million active monthly users (MAUs.) Viacom immediately began launching new streaming channels on the service. For example, Comedy Central launched specials from The Daily Show with Trevor Noah and library episodes of Tosh.0, Another Period, and Ugly Americans. The approach helped boost MAUs for Pluto TV  50% to 18.1 million in Q3 2019.

Viacom merged with CBS in August of 2019, and the joint company continues to leverage Pluto TV to monetize existing assets better. Jeff Shultz, EVP and Chief Business Officer of Pluto TV, told nScreenMedia that the free ad-supported TV (FAST) service helped promote a reboot of The Hills, which is only available on premium cable:

“We launched a 24×7 channel reminding people that they cared about those characters and that storyline and then very overtly throwing to the premium season.” 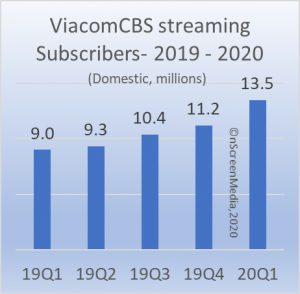 CBS’s two premium streaming services, CBS All Access and Showtime, have exceeded the subscriber launch goals. The company hoped the pair would reach 8 million subscribers by 2020. In the Q1 2020 earnings announcement, ViacomCBS disclosed the services had reached 13.5 million. Both services seem to have benefited from the surge in streaming caused by shelter-in-place viewing in March and April. They gained 2.2 million subscribers between Q1 and Q4 2019. In only the first quarter of 2020, the pair increased by 2.3 million.

CBS has done an excellent job producing original series for the All Access platform to keep it growing. It is also the first broadcaster to recognize that pay TV operators can help build a streaming audience. ViacomCBS announced last week that CBS All Access was rolling out on Comcast Xfinity set-top boxes.

Mr. Bakish says CBS All Access is getting a major renovation with more content and a rebrand and relaunch to follow. The SVOD service will receive “thousands of hours” of additional content from Nickelodeon, Comedy Central, Smithsonian, MTV, BET, and Paramount. 100 Paramount films have already been added. Originals and first-window content are to follow.

CBS All Access already provides access to 200+ CBS affiliates, including NFL, NCAA, PGA and other sports content that they carry. The company has also added exclusive streaming rights to women’s and UEFA Soccer to All Access. As well, the news is a significant part of the package, through the local affiliates and via CBSN, the online 24×7 news channel.

Mr. Bakish gave no details of possible price changes or relaunch data for All Access: The Next Generation (TNG.)[1] However, with the extensive film and TV library, originals, live sports, and news, the final product will be a unique offering in the streaming market. As well, he thinks Pluto TV and All Access: TNG can work together to help each other grow.

One + one equals three!

ViacomCBS intends Pluto TV to help build the funnel for All Access: TNG. The company has already used its FAST platform to promote the launch of Picard, according to Mr. Shultz:

“We did another one <promotion> debuting Picard in support of the new series on CBS All Access. There was a day when our Sci-Fi channel was Picard running 24 hours a day. Hundreds and hundreds of thousands of people watched that show on Pluto. If you liked it, there was only one way to see episode two; that was subscribing to CBS All Access.”

Mr. Bakish says in June, Pluto will launch click-through ads and leverage them to get people onto the newly refurbished All Access: TNG. He says the launch will be the beginning of a close relationship between the two services:

“As time goes on, this integration will continue to evolve as we create an owned and operated streaming ecosystem with a massive free point of entry combined with upsell pay option.”

Both subscription and free ad-supported platforms are growing strongly. With the two working together in close cooperation, both should see the benefit of even faster growth.

Pluto TV and CBS All Access have both enjoyed 50% growth over the last year.

ViacomCBS is beefing up All Access as it heads towards a relaunch and rebrand of the next-generation platform.

Cooperation between Pluto TV and All Access: TNG will tighten as each can help the other grow faster.

[1] ViacomCBS has not revealed what it plans to call the remade version of CBS All Access.