CBS says it will dribble Star Trek out week-by-week through All Access, rather than release all the episodes at once. The company is hoping it can get people to stay longer, rather than binge the show and bolt the service. Will it work?

CBS’s boss Les Moonves confirmed that the release of Star Trek through CBS All Access will be the same model as with regular TV, one episode a week. This is much different to the Netflix approach (and Amazon and Hulu) where all the episodes of a new show are usually released all at once. Mr. Moonves is clearly concerned that people will sign-up for All Access for a month, binge the show and then cancel. Is he right to worry about this behavior? 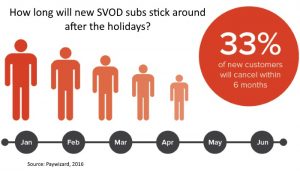 New research from Paywizard suggests Mr. Moonves should be worried. In a US consumer study just before the 2015 holidays, the company found that 31% of consumers intended to sign-up for an OTT service. Two thirds of those would actually consider signing up for more than one service. Unfortunately, a third said they will cancel within 6 months.

I spoke with Bhavesh Vaghela, CMO of Paywizard, at NAB and he told me there is a big difference between consumer behavior with the top three SVOD providers (Netflix, Hulu and Amazon Video) and the rest. Churn in the top three services is much lower than in all the other services. He said consumers are very comfortable signing up for a lesser service, watching the shows of interest, and cancelling when done. He called this dip-in-dip-out behavior.

CBS All Access is certainly not in the top three SVOD services. Digitalsmiths found in Q4 2015 that Netflix was number one, with 48% of consumers using it, Amazon Prime was number two with 20%, and Hulu number 3 with 11%. CBS All Access was used by just 1.8% of survey participants.

There is no question that millions will want to see the new Star Trek series, but Paywizard’s research suggests that many of them will cancel as soon as they have watched all the episodes. Releasing one episode a week will force the audience to remain paying for as long as the show lasts.

The Star Trek series will create a window for CBS to prove that there is more to All Access than just that one show. Newer shows like Extant, Big Bang Theory, and Supergirl could be of interest to the Star Trek audience, and the entire library of old Star Trek series surely will be. However, these programs are not exclusive to CBS All Access. Since virtually everyone that is likely to come to watch Star Trek will already have other services with CBS content, it’s not clear there will be enough value to hang on to the new subscribers.

Perhaps, in the end, that won’t matter to CBS. The costs to the company involved in sign-up and cancel are practically nothing. If half the audiences quits after 6 months, many of them are sure return at the start of a new season. And if it can hang on to a substantial portion of that audience, then the Star Trek experiment should be counted as a big success.

CBS is going to release the new Star Trek series through All Access one episode per week.

This will force the millions of fans to subscribe to the service for multiple months.

Many of these new subscribers will likely cancel when the show is done.