Can CBS All Access become a competitive skinny bundle?

CBS chief Les Moonves says he may expand CBS All Access by adding premium channel Showtime. He also believes the skinny bundle approach will ultimately prevail. Can he reposition All Access as a key skinny bundle provider?

Speaking at the Deutsche Bank Technology, Media and Telecom conference in Palm Beach Fla, Mr. Moonves says the company is thinking about bundling Showtime in with CBS All Access at a special discount price. CBS All Access currently costs $5.99 a month and Showtime $10.99 a month.

Mr. Moonves says the company is planning other updates to CBS All Access. Last year, he announced a new Star Trek series would premiere exclusively on the service. CBS is also trying to get the rights to broadcast NFL games. Currently, if a football game is being aired on one of the local channels All Access carries the game must be blacked out. Finally, the company is thinking of allowing subscribers to buy- out of watching ads. Hulu allows its subscribers to do this for an additional $4 a month. 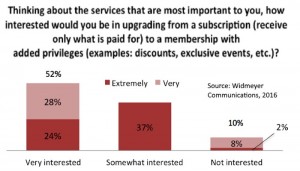 The idea that SVOD subscribers are willing to upgrade their tier of service seems to be gaining traction in the market. Amazon has had success with its Streaming Partners Program, and new data suggests consumers are ready for the approach. Widmeyer Communications and Vindicia says that 52% of a survey group comprised of 1000 US adult consumers with an SVOD service would be very interested in upgrading to a premium tier with added privileges. The company also found that 76% would be comfortable paying an additional $3.99 a month for this.

The “skinny bundle” approach, typified by Sling TV, is very much on the mind of Mr. Moonves and his executives. He said though the approach hasn’t quite caught on yet, he thought that it was inevitable:

Someone’s going to figure out how to do this and how to give people what they want to watch and it’s not for $100 a month, it will be for $35 or $39 dollars a month where you’ll really get the 12 to 15 or 18 channels that you care about. And not get the karate channel for 25 cents a month. That doesn’t make sense anymore.”

The company appears to be trying to figure out how to position CBS All Access as a skinny bundle product. Combining Showtime with All Access is a start, but will likely result in a combined price of around $15 a month. However, where does the company go from there? Certainly, other CBS properties like The CW could be a candidate, and CBS News and Sports could contribute, but compared to Sling TV’s best of cable bundle for $20 a month this isn’t even close to a bargain.

The only way CBS can grow All Access into a competitive skinny bundle product is to partner with other media companies. This partnership could take one of two forms: licensing the content, or reselling it a la carte.

Licensing the content seems like a tough sell, bearing in mind CBS has chosen to go it alone rather than participate in Hulu (co-owned by Disney, NBCU and Fox.) Web originals would be easier to get, though less appealing to CBS’s core audience.

Reselling sounds like a more realistic option. Amazon Streaming Partners Program has attracted some big names: like Showtime, Starz, and Lifetime Movie Club. However, Amazon has a much bigger audience to sell to than CBS can deliver today, but perhaps Star Trek can begin to change that.

CBS says that the skinny bundle approach will eventually succeed.

It appears to be trying to figure out how to position CBS All Access as a skinny bundle provider.

To do it, it will need to partner with other media companies, likely striking reseller agreements rather than licensing the content outright.