Hulu is growing faster than Netflix in the US market. It is pushing to keep the growth coming and to boost the number of subscribers watching with ads with price cuts and new original content.

In Hulu’s Digital Newfronts 2019 presentation, the company announced it had reached 28 million subscribers. Will breaks down the numbers into paid and free customers. Other estimates put the number of Hulu Live subscribers at about 2 million. Hulu Live is a vMVPD service like Sling TV and YouTube TV. The company also said time spent and total hours watched per subscriber both saw substantial gains in 2018.

Hulu adjusted pricing in February by lowering the entry-level tier, which requires subscribers to see ads. Conversely, it raised the price of watching without ads, though the net effect on existing ad-free subscribers was no change in pricing.

The objective appears to be to boost the number of people watching ads. The mix between ad-free and regular views has been shifting 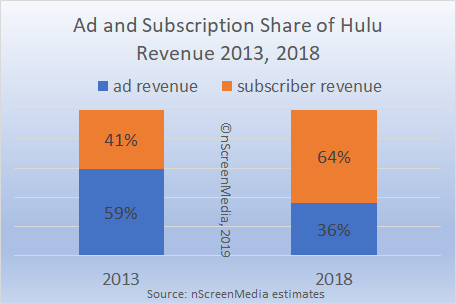 toward ad-free for a while.  I’m skeptical that the price cut will boost Hulu subscriber growth, though it will increase the number signing up with ads. Will thinks the price cut was a good move.

Chapter 3: Advertisers are hungry for inventory (10:00)

Hulu’s move to boost viewers watching with ads comes at a great time for advertisers. They are struggling to reach viewers at primetime with their commercial message as viewers switch to ad-free SVOD services.

Hulu is also introducing a new ad type for binge viewing. A Hulu spokesperson described it this way:

“The binge ad experience will require a brand’s message to be tailored for that viewing situation. This could be anything from offering a viewer the opportunity to watch the next episode in their binge session commercial-free to a personalized offer from a brand. We will be rolling out our binge ad experience in beta in Q4 and plan to open it up to all advertisers in 2020.”

Hulu continues to innovate with advertisers to come up with new non-disruptive ad approaches.

With Hulu and the release of Disney+, Disney is emerging as a leader in the streaming market.

Comcast and NBCU are becoming less aligned with the direction of Hulu with every day that passes. Losing NBC content from Hulu would be a severe problem for the service. It could derail growth.