UK and US see big declines in viewing 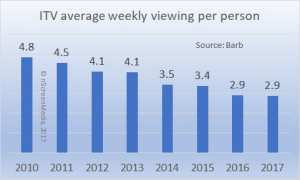 The UK’s top commercial broadcaster, ITV, has seen an even more dramatic decline in viewing over the same period. Since 2010, the average weekly viewing per person for the channel has fallen from 4 hours and 50 minutes per week to 2 hours and 52 minutes, down 41%. For a station dependent on advertising revenue, the size of the decline has been nothing short of a disaster.

Late in 2016, ITV turned to boxing to add a new revenue source for the company: pay-per-view. ITV Box Office was launched late in 2016 after ITV acquired the rights to an IBO world super middleweight title bout between Chris Eubank Jnr and Renold Quinlan. UK boxer Eubank emerged as the victor of that fight. Though there were some problems with streaming the event, ITV was sufficiently encouraged with the overall performance to deliver Chris Eubank’s title defense in July.

ITV has expanded its commitment to boxing by launching the World Boxing Super Series, an exclusive multi-screen series of PPV events through ITV Box Office. The series will feature more fights from Chris Eubank Jnr as well as other fighters, such George Groves.

ITV management recognized there needed to be a change in the approach to selling each fight to optimize the value of the investment in the series. ITV turned to existing billing partner Paywizard and Ostmodern, an online video delivery company, to help drive this change in approach. The two technology companies worked together to create an online video platform, called Venue. According to Neale Dennett, Director of Pay Content and Packages, at ITV:

“When they <Paywizard> launched Venue with Ostmodern, we felt their philosophy around treating PPV viewers as long-term subscribers aligned with our over-arching strategy in growing our Pay-Per-View offering.”

Bhavesh Vaghela, CEO of Paywizard, recognizes the importance of seeing PPV purchasers as continuing customers rather than one-off visitors:

“For customers who commit to short-term purchases for specific content, it is important that operators can deliver the same quality and service as if they were long-term paying customers.”

Venue is optimized to lead customers through what Paywizard calls the eight consumer Decision Moments. These are:

Managing PPV customers through the eight decision moments should help ITV keep PPV customers coming back for every fight in the series.

Online pay-per-view events could be a valuable new revenue source.

Broadcasters should be careful to treat individual event purchasers as continuing customers if they are to maximize their pay-per-view investment.