While broadband speed has been increasing so too have the bandwidth needs of the biggest OTT video services. Luckily the biggest consumer, Netflix, is ready to reduce its need, though it is shocking the company hasn’t addressed this before.

According to the latest State of the Internet report from Akamai, ISPs in both the US and UK have been hard at work improving the speeds of their broadband networks. Between Q3 2014 and Q3 2015, U.S. ISPs have boosted average speed 10% to 12.6Mbps, and average peak speed has increased 17% to 57.3Mbps. The U.S. has also improved the reach of faster broadband. The number of people able to access connections at or above 15Mbps increased to 24%, up from 19% one year earlier.

The UK has done even better than the U.S.. Average broadband speed topped the U.S. reaching 13Mbps, up 21% from one year earlier. However, the average peak speed still lags the U.S. slightly, at 54.2Mbps. The UK has done a better job boosting the number of people with faster broadband. 28% of UK broadband connections can now achieve speeds of 15Mbps or above, up from 20% last year. 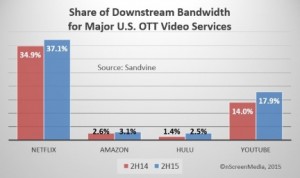 As broadband providers improve their networks OTT video providers are increasing the demands they place on them. Sandvine says that the top 4 online video providers all increased their overall share of downstream bandwidth in the last year.* Leading the charge was, of course, Netflix. The company grew its overall share of downstream U.S. bandwidth from 34.9% to 37.1%. YouTube, the second biggest consumer of downstream bandwidth, also boosted its share over the last year, growing from 14% to 17.9%.

Hulu and Amazon both increased their share of downstream bandwidth, though they are consuming less than a tenth as much as Netflix. Hulu grew its share from 1.4% to 2.5%, and Amazon grew a smaller amount, from 2.6% to 3.1%.

Given the amount of bandwidth it consumes, I’m sure ISPs are very happy that Netflix has announced it will be moving to a new encoding scheme in the New Year. It could reduce the overall bandwidth it uses by 20% or more, and reduce the speed of broadband required to deliver a good quality picture. However, ISPs are probably less than pleased at how Netflix is currently encoding content.

Netflix admitted that when it streams a cartoon in HD and an action movie in HD it consumes the same amount of downstream bandwidth for each. These two video types are vastly different. Cartoons can be compressed a lot because colors tend to be uniform, characters typically are not in constant motion, and the picture lacks a lot of detail (like skin pores, individual blades of grass, etc.) Action movies are the exact inverse of this, with lots of motion, color tones and details.

This means there is a lot of data required to represent an action movie accurately, and not a lot required for a cartoon. A cartoon in 1080p resolution can be streamed at 1.5Mbps in the new Netflix encoding scheme, versus 4 times that using the old. The lackadaisical approach to encoding that Netflix has been using is part of the reason ISPs keep having to boost broadband speed to the home!

I can only hope that Hulu, YouTube and Amazon are less wasteful than Netflix when they stream their video.

[Update: Tim Connolly from Hulu confirmed that the company has been using the more bandwidth efficient per title encoding recipes for a number of years.]

ISPs are improving their networks to boost broadband speed and reach partly to keep pace with the growth in OTT video consumption.

At the same time, OTT video service providers are increasing their needs from those broadband connections.

OTT video service providers would consume a lot less broadband resources if they adopted a saner approach to encoding their videos.