Broadband-only viewers have fewer TV services, pay three-times less for them, and more are satisfied with them versus pay TV subscribers. However, when it comes to canceling, it is still all about price!

TiVo’s Q1 Video Trends Report reveals some of the underlying dynamics of the North American market for TV services. The data was gathered from 4,367 U.S. and Canadian adults during the first quarter of 2020. As such, it includes some of the impacts of the C-19 pandemic. However, it also points out some longer-term trends.

Multiple TV services are the norm 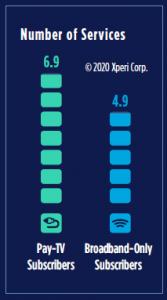 The first thing to note from the data is how many TV services people are using. Those with a pay TV subscription use an average of 6.9 services, while broadband-only subscribers use 4.9. Last week, nScreenMedia reported the comScore finding that on average people were using four services. However, the comScore number is only for pay services. TiVo’s findings reflect the usage of pay TV, free-to-air, SVOD, and AVOD services. 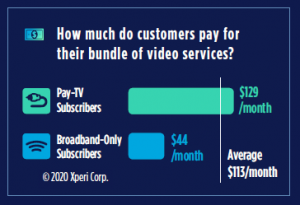 Perhaps the considerable difference in monthly spending is because pay TV subscribers like more services. After all, TiVo says they use two more services than broadband-only viewers. However, one of those services is, of course, pay TV. Moreover, that one service accounts for all of the spending difference between pay TV and broadband-only subscribers. The average video revenue per unit (subscriber) Comcast earned in the first quarter was just over $90 per month. 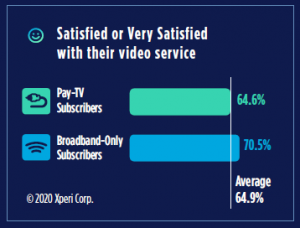 Part of the difference between pay TV and broadband-only subscriber satisfaction could be the price of the services. For many years, pay TV subscribers have cited cost as a primary reason for getting rid of the service. In the last year, the price problem has gotten much worse. Of those that have cut their pay TV service in the previous six months, 92% cite price as the main reason. Last year, 85% said the same thing. The second most important reason -with 23%- was relying on only streaming services.

To be sure, price is also the number one issue with those leaving an SVOD service.  53% of broadband-only customers that had cut a service in the last six months cite cost as the reason. However, engagement is almost as important. 43% say they were no longer watching anything on the service.

When people cancel both types of service, they cite cost as the primary reason.

However, the lack of interest in the content is almost as significant as the price for SVOD cancelers.