Broadband is the main way people can experience Ultra HD today. Unfortunately, there are two limitations which are certain to slow adoption of 4K by the masses.

Caps on broadband are a big issue

Two major operators have now deployed tiered broadband in major markets. AT&T and Comcast both have raised their former broadband data caps considerably, to 1Tbyte per month. Comcast says less than 1% of its customers consume more than that.

1Tbyte sounds like an awful lot of data. Streaming Netflix at 3.5Mbps (a good average for HD quality video from the company), a subscriber can watch 21 hours of video a day. But the equation changes dramatically for Ultra HD.

Netflix streams UHD at 15.6Mbps, and with high dynamic range (HDR) that requirement expands to more like 17-18Mbps. Higher frame rates will also push the bandwidth higher still. At these bandwidths a broadband user could stream 4-5 hours of UHD video per day. Again, this sounds like a lot, until you take into account your current usage patterns. 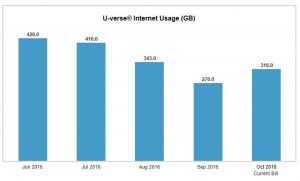 For example, I was shocked to discover that the three adults that live in my home managed to consume 343Gbytes of data in August. We watch 2 hours of connected TV video a day, several hours of Twitch and YouTube video, and sundry Facebook videos. Devices are constantly connected and updating during the day (and I suspect the night too.) If a large proportion of the video we watch switched to Ultra HD, my family could easily exceed the 1Tbyte cap.

For customers that hit their cap, both AT&T and Comcast allow customers to buy more data. It is not cheap. Comcast charges $10 for an additional 50Gbytes, and $60 a month for an unlimited plan. AT&T offers unlimited plans for $30 more.

What will be the impact of these caps overtime? Consumers will think twice about streaming ultra HD video, just as they do about streaming video on their mobile data plan.

Netflix recommends at least a 25Mbps broadband connection if a subscriber wants to watch Ultra HD. On the face of it, things look pretty good on that front in the US. Akamai says that the average peak broadband connection was 60.7Mbps in Q2 2016. States with the lowest average peak connection speeds were Mississippi and Maine, with 47.0Mbps and 46.6Mbps respectively. However, when it comes to video streaming, it is the ability to sustain the bandwidth for hours at a time. And on that front, things don’t look quite so good.

Akamai says that 25Mbps broadband adoption rates remain low in the U.S., though it does not specify an overall average.* The District of Columbia has the highest, with 28% of connections achieving a 25Mbps or above average speed. Delaware and Rhode Island have the second fastest, with 21% each. Kentucky and Idaho had the lowest, with adoption rates below 5%.

These numbers suggest overall around 10% of US broadband connections are capable of sustaining 25Mbps or higher. That means online video services with Ultra HD assets can reach just 12 or 13 million homes.

ISPs are introducing caps and charging extra if the cap is exceeded.

Though the caps sound high today, overtime, as Ultra HD becomes more common, many broadband homes will exceed their cap.

The ability to deliver UHD over broadband is still very limited. In the US, it is possible to reach at most 12M homes with 4K content.