Neutralize subscription resistance with the addition of usage-based billing

The bar that SVOD services must clear to get people to sign up just keeps getting higher. Perhaps it’s time for service providers to think outside the subscription box and add other billing approaches.

The noise level in the market for SVOD services has just increased dramatically with the release of Disney+ and Apple TV+. The impending entry of HBO Max and Peacock will make matters worse. Moreover, with consumers likely to sign up for one or more of these services, it will be much tougher to get them to commit to any other service. 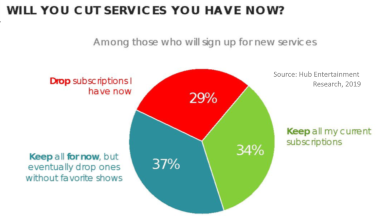 Hub Entertainment Research says that 29% of people planning to sign up for a new SVOD service will drop another subscription to do it. As well, a further 37% say they will drop ones without favorite shows down the line.

These and other signs suggest many people are reaching a limit, at least for now, to the number of services to which they are willing to subscribe.

There are other reasons people are reluctant to subscribe to more SVOD services. Americans are becoming shy about sharing their personal information. The Advertising Research Foundation found that the number of people willing to share something as basic as a home address fell from 41% in 2018 to 31% in 2019. Willingness to share an email address also fell from 61% to 54%.

The reason for the increasing reluctance to share personal information is apparent. The frequency of data breaches exposing consumer data remains at extraordinary levels. The number of sensitive consumer records exposed in 2018 increased 128% over 2017, to reach 447 million.

When confronted with the sign-up page to an SVOD service, little wonder that many consumers hesitate.

Requiring a credit card to register for a service is a real problem for the 1-in-5 Americans that don’t have one. Even worse, credit card ownership in people under thirty is the exception, not the norm. Only one-third of 18 to 29-year-olds say they have one.

In the mobile world, subscription-only models were not able to carry penetration to above 90% in the U.S. The industry had to adopt other methods, including prepaid accounts and top-up cards sold through supermarkets. Now, almost a quarter of mobile customers use prepaid billing.  What’s more, they aren’t necessarily choosing to pay prepaid to save money. Flexibility to move carriers plays an essential role for many.

Some video providers have already responded to customer cravings for a different way to pay. For example, Sky in the UK realized there was an untapped opportunity with Sky Sports channels. Pay-TV penetration is 58% in the UK, meaning at least 42% of the population do not have access to Sky Sports. Yet 70% of the UK population watched Premier League soccer in the 2017/2018 season.

To capture soccer fans that have resisted pay TV, Sky allows people to buy access to Sky Sports channels through its Now TV online service for one day, one week, or a full month. Sports fans can even buy a mobile-only monthly pass for £5.99. Sky has structured the pricing so that a subscription to pay-TV is still the cheapest option to obtain more frequent access. However, the approach has allowed Sky to monetize a group it couldn’t reach before.

It could be time for SVOD services to consider offering their potential customers more than just the option to subscribe. There are innovative billing approaches that solve all the problems highlighted in this opinion piece. For example, imagine if a service allowed customers to pay for $20 worth of viewing using a prepaid store card. Every time a customer streams a show, an appropriate payment is deducted from the $20 bucket of viewing minutes. The approach neutralizes concerns over privacy, commitment, and forgetting to cancel another subscription. It also supports people without a credit card. Moreover, pricing can be structured to maintain the advantages of a regular subscription.

With an increasingly crowded SVOD market, it could be time for video providers to think outside the subscription payment box. The addition of usage-based billing could help capture some of the customers that are just not ready to subscribe.

It is becoming harder to persuade consumers to subscribe to more online video services.

Usage-based billing models can neutralize the nervousness around subscribing and help capture people that aren’t ready to subscribe.