BBC battles Netflix for the young. Can Quibi help?

The BBC is witnessing a broad decline in the reach and use of its broadcast TV channels. The young are particularly affected as they are spending more time with Netflix. BBC Studios has invested in the youth-oriented mobile-first service Quibi. Can it help the BBC understand how to win back the young audience?

Broadcast TV reach declines across the board

The BBC collects together SVOD, DVD viewing, and gaming as other uses for the TV. The reach of these other TV uses grew 3.1% over the last year. Most of the growth is likely due to SVOD services since the number of UK SVOD homes increased 22% between 2017 and 2018, to reach over 40%. 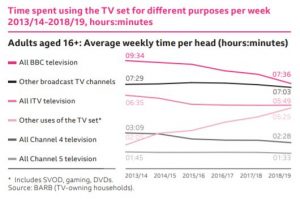 Among the 16 to 34-year-olds the decline was more pronounced. For example, the reach of BBC TV channels fell 4% over the last year, sinking to 56.2%. Conversely, the reach of other TV uses increased by almost 3%, to 67.4%.

Time spent watching BBC TV channels also continued to decline. Since the 2013/14 season, weekly time spent with BBC TV has fallen 22%, from 9 hours 34 minutes to 7 hours and 36 minutes. On the other hand, other uses for the television has increased nearly 3-times, from 2 hours and 5 minutes a week to 5 hours and 26 minutes.

The BBC looks to Quibi for help with the young

Reconnecting with young people has become a priority at the BBC. The company moved BBC 3 from traditional broadcast to online delivery in 2016. The corporation has also increased youth content spending and is working to make BBC iPlayer – its main online app – more of a destination than a TV catch-up service.

The venerable corporation is also trying to learn from Jeff Katzenberg’s soon-to-be-launched mobile video service, Quibi. BBC Studios recently won a commission from Quibi for a nature series focused on female animals, titled Fierce Queens. However, it has also made a small investment in the service. Perhaps one of the most important benefits of the investment will be a front-row seat on the success or failure of the service with its target audience, the 25 to 35-year-olds.

As the BBC boosts spending on youth content, it may well have to pay a lot more to get the content produced. The competition for content creator talent is growing fiercer. Netflix has recently opened a new production facility in the UK. The 14-stage space is in Shepperton Studios, just outside London in Surrey. Shepperton has been at the heart of the British film-making industry for a century or more.

“This investment will ensure that British creators and producers have first-rate production facilities and a world stage for their work.”

The company is already heavily invested in UK production. Speaking at a UK parliamentary hearing, Netflix officials said that nearly forty productions had employed 25,000 creatives, including cast, crew, and extras. Presumably, the new Shepperton studio will increase that number.

Ironically, the UK and other European governments are demanding global players like Netflix invest more in local content creation. As they respond, the increased competition for creative talent can only make things harder for a local broadcaster like the BBC battles Netflix.

Regional broadcasters are seeing declines in the reach and time spent viewing their TV channels.

The decline is felt most sharply in the young, who are spending increasing time with global SVOD providers like Netflix.

However, the broadcasters face higher content production costs as global SVOD providers are forced by regional governments to boost content creation in their countries.