TiVo data shows Hulu right to dump free AVOD, or does it?

New data from TiVo seems to undermine the opportunity for ad-support VOD services online. Does this mean Hulu was right to dump free-ad-supported content?

The opportunity for ad-supported online TV could be huge

TiVo asked survey participants “if Netflix or Hulu offered a FREE TV service, but you were required to watch commercials, would you consider using it?” This question is a little ironic, since Hulu was born as a free TV service and only eliminated the last vestiges of free ad-supported content last quarter. That said, 69.4% said they would watch commercials if the service was free.

SVOD not done expanding yet

These numbers, however, suggest there is resistance to taking more than two SVOD services. Over the last two years, the number of SVOD services available has grown from less than 10 in 2014, to around 100 today. A huge array of SVOD services delivering everything from Broadway theater to science documentaries have come to market. In light of these numbers, it’s a little surprising there aren’t more multi-service households.

TiVo suggests that its data supports Hulu’s decision to sunset free-ad-supported video at the site.  Since it shows more than 4 ads per 30 minutes, and survey participants said they didn’t want to watch that many, TiVo argues Hulu couldn’t make money from such an ad load. 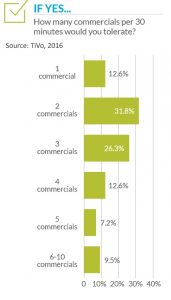 I do not agree with this conclusion. In the past, I estimated the amount of Hulu revenue made from advertising exceeds the subscription revenue. This seems to indicate that subscribers to Hulu are willing both to pay $8 a month for the service, and watch more than 4 ads per 30 minutes. Though Hulu does not publish how many people have taken the $4 option to watch ad free, it’s likely that most of the 12M Hulu subscribers are still watching ads.

Hulu’s performance suggests consumers are willing to get over their antipathy for ads if the content is good enough. There seems to be consumer resistance to taking multiple SVOD services. That could mean there is an excellent opportunity for ad-supported content to augment SVOD services. And at ad loads above the 4 per 30 minutes indicated by TiVo’s research.

TiVo data suggests resistance to taking more than one or two SVOD services.

The data also shows many people willing to consider an ad-free service, though at very low ad loads.

Hulu’s performance suggests people are willing to get over their reluctance to watch ads if the content is good enough.