In an interview with The Information, John Donovan, the CEO of AT&T Communications, laid out his vision for the future of the TV bundle, and it is decidedly skinny. To get there, he needs programmers to accept engagement pricing, something they unlikely to do.

In an interview with The Information, Mr. Donovan expounds on his belief that TV providers should be compensated based upon the engagement their channels drive. He is trying out this idea today with the participants in the company’s $15-a-month WatchTV service. Many of the channels in WatchTV come from WarnerMedia, a division of AT&T.

The idea of engagement pricing is nothing new. Most SVOD services live and die by it. Fail to deliver enough engagement for subscribers, and they will leave you at the end of the month. However, Mr. Donovan points out that the dynamic in the television industry is the antithesis of engagement pricing:

“The content industry has declining viewership but increasing pricing. Is that a good value proposition for customers?” 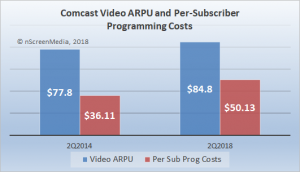 Certainly, the data supports his position. For example, Comcast has seen programming costs rise from 46% of video ARPU in Q2 2014 to 59% in Q2 2018. Over the same period, engagement with TV has been falling. The time an average TV viewer spent watching live TV fell 15%, and among 18-24-year-olds it fell 25%.

Notwithstanding the falling viewership, no major programmer is going to risk earning less money for their channels by moving to engagement pricing models anytime soon. Not with $50 billion a year in programmer licensing fees at stake.

Bring back the skinny bundle

Mr. Donovan needs engagement pricing because old TV licensing practices have caused channel inflation for his DirecTV Now vMVPD service. Programmers have, in effect, forced DirecTV Now’s bundles to be bigger than they should be:

“The reason I said DirecTV Now isn’t ideal: It’s too wide a range. It has too much content. It serves too many use cases, and so it’s bigger than it needs to be, and it’s not as small as it could be, and so that’s why we think that it may be replaced with two offers. It may be replaced with three offers, but it’s not going to stay the way it is because 100 channels for $40 isn’t the market.”

The way to build a channel bundle product is to return to the roots of the vMVPD business. He wants to resurrect the skinny bundle:

“The way that you build a skinny bundle is you start with enough programming that you have a deal, like you have product, and that gives others the incentive to be on the product.”

That is how he has constructed WatchTV, based on WarnerMedia channels. Without engagement pricing, however, building more skinny bundles like WatchTV will not be easy.

The truth is, programmers have no incentive to work with AT&T on skinny bundles. Not only would it put a large amount of revenue at risk, but also they don’t believe they need AT&T to achieve success. They are launching direct-to-consumer services, subject to “engagement pricing,” while sustaining the very lucrative traditional pay TV business.

Mr. Donovan recognizes programmers may not want to work with him on his skinny bundles. However, he thinks this might be a mistake:

“They better do their math right, because in this new world, there’s no such thing as all customers having must-see television, because there’s a way to get things.”

You can bet that broadcasters like Disney and CBS are doing their math very carefully indeed.

Such models would allow him to create sharply targeted skinny bundles of TV channels.

Programmers likely won’t work with AT&T on the approach. It puts too much revenue at risk, and they don’t need help a skinny bundle’s help for online success.

1-in-6 cancel cable for a vMVPD. The rest cut-the-cord.