AT&T is introducing a middling tablet, called Primetime, at a time when the tablet market is faltering. However, AT&T has aligned Primetime with its wireless and video strategies, and with the addition of Time Warner content, it could be the go-to device for the holidays.

Primetime is a middle-of-the-road tablet

Now might seem a strange time for AT&T to launch its new Primetime tablet. The Android-powered 10-inch LTE device does not stand out among its peers. It has an HD display, 2GHz Snapdragon 625 processor, 2GB of RAM and 32GB of onboard storage. However, the price is relatively attractive. AT&T wireless customers can pay $200 (or $10 a month for 20 months) to own it, or $29.99 with a two-year contract.

Primetime is also entering the market at a very difficult time for tablets.

Sales of tablets have been falling worldwide. IDC says that year-over-year shipments were down 8.5% between Q1 2016 and Q1 2017.  Meanwhile, the smartphone market continues to grow, with 4.3% increase in shipments over the same period. 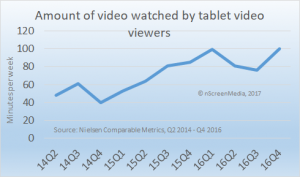 AT&T has optimized the device for a better video experience. It has front firing speakers, Dolby audio, and two Bluetooth headphones can connect to it at the same time. The device also allows accelerated access to DirecTV Now and the DirecTV TV Everywhere app from the lock screen.

While Primetime is not going to set the tablet world on fire, it could well be a hit with AT&T wireless customers. AT&T is pushing DirecTV Now hard with customers. For example, if you sign up for an AT&T wireless unlimited plan you can get the 60+ live channels in DirecTV Now for just $10 a month extra. HBO costs just $5 a month more.

There is another hidden benefit to this wireless bundle. Though the wireless plan is “unlimited” AT&T may slow speeds when a user hits 22GB. Hitting that cap is very easy to do when streaming video.^ However, DirecTV Now streaming does not count against the data limit.

AT&T is introducing a tablet, called Primetime, with middling specs at a time when the tablet market is faltering.

However, Primetime is very much aligned with AT&T’s wireless and video strategies.

It brings benefits to any AT&T wireless user that gets the device.

It could become even more attractive if the Time Warner deal is approved.

^Streaming on T-Mobile’s network at 480p resolution I typically consume nearly a half a gigabyte of data per hour.