According to Nielsen’s Q3 Total Audience report, the migration away from live viewing, particularly among the young, is continuing. As in the previous few quarters, Live TV viewing continued to fall. Though there were loses in every age group, even in the over 65s, the bulk of the losses occurred with the younger viewers. Live TV viewing fell 12% year-over-year for the 12 to 24 year-olds, and 8% for the 25 to 34 year-olds.

The over 65s were the only group that seem to using their pay TV subscriptions more, increasing live TV plus timeshifted viewing. Every other age group spent less time with traditional television. For example, millennials and teens watched TV over two hours less per week in Q3 2015 than a year earlier. Much of this viewing is trasnfering to online platforms.

All of the connected video platforms saw year-over-year gains in usage in Q3. Even the humble PC, which has seen declining usage for video in the past few quarters, eked out a small gain. Those that watch video on a PC watched 1.4% more in Q3 2015. Smartphone owners watched a third more video on their device in Q3. However, the big winner was what Nielsen calls multimedia devices* (Roku, Apple TV, Chromecast etc.) Users of these streaming media players increased their usage 100%. The biggest loser over the last year was the DVD/Blu-ray player. Owners used the device 12% less than last year. This seems to parallel the general decline in physical media usage we have reported elsewhere.

The biggest users of streaming media players are the 25 to 34 year-olds, watching over 2 hours a week on the device. Interestingly, young children are also big users, consuming one and half hours a week, though other data shows they also big mobile device users. The 18 to 24 and 35 to 49 age groups are just behind the very young in their usage of multimedia devices. 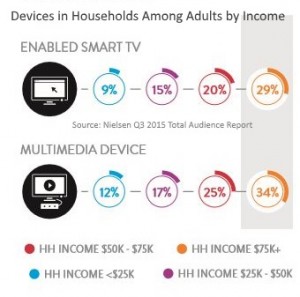 Though there may be many more smart TVs in people’s homes, apparently consumers are simply not activating and using them to watch online video. Nielsen says that across every income level multimedia devices are in more American homes than enabled smart TVs. For those with incomes below $25K, 9% have an enabled smart TV and 12% a multimedia device. At the other extreme, those earning $75K or more, 29% have an activated smart TV and 34% a multimedia.

This difference could get even larger this holiday season, with multimedia devices (specially streaming sticks) on many people’s shopping lists.

The television still exerts a powerful influence on the consumption of video, whether it be through traditional channels or online.

With TV connected multimedia devices on many holiday shopping lists, this effect should increase in Q4.

*nScreenMedia typically refers to multimedia devices as streaming media players, but will use Nielsen’s name for the clarity of this piece.