Apple is not serious about online video

While Apple’s stock is riding high, the company’s video strategy is floundering. Can it really afford to fail in the market for video entertainment?

Apple stock at an all-time high

Apple’s stock reached an all-time high of $134.95 on Tuesday. The market is optimistic for the next version of the iPhone, version 8, which likely will sport an organic light-emitting diode (OLED) display. Samsung Display said it had received an order for 60 million OLED smartphone displays worth $4.3 billion from Apple.

While iPhone sales are key to the company’s revenue picture, the 10-year-old product is hardly likely to ignite a huge growth spurt. Meanwhile, the company is losing ground in the $100B video entertainment market.

Apple is losing to Amazon in its core video business

While rivals such as Amazon have built robust video service businesses, Apple has failed to make any substantial progress. It may even be falling behind.

Apple has stayed focused on its iTunes video sales and rental business. However, the company has lost substantial ground to its primary rival online movie store, Amazon. In Q3 2013, 7.2% of U.S. consumers said they rented or purchased a movie from iTunes, and 8.9% used Amazon. Between 2013 and 2016, those using Redbox Kiosks plummeted from 16.3% to rentals 12.8%. Unfortunately, most of the lost market share went to 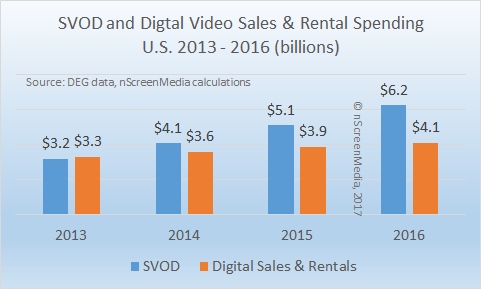 Staying focused on video rentals and sales, as Apple has done, appears to have been a strategic mistake. The amount U.S. consumers spend on SVOD has increased from $3.2B in 2013, to $6.2B in 2016. Digital video rentals and sales increased from $3.3B to $4.1B over the same period. Amazon has benefit from growth in both markets. Apple has only marginally benefited in the smaller and slower growing rental and purchase market.

No progress in subscription video

It seems like everyone but Apple is launching a streaming video business these days. Rumors persist that the company is negotiating in Hollywood for its own service. And while these rumors have been circulating for years, others have rolled up their sleeves and gotten the job done. I discussed the soccer oriented virtual MVPD fuboTV Premier yesterday. It has managed to build a very competitive offering including mainstream TV channels such as SyFy and USA.

If fuboTV can get the TV licenses it needs to launch a credible service, why can’t Apple?

Many SVOD services are also investing in original video series. Similarly, Apple is beginning to dip its toe into these waters. Oddly, its efforts are in support of the Apple Music service.

The company recently announced two new web video originals, which the company plans to make available to Apple Music subscribers for free without ads. Planet of the Apps is a reality TV show where entrepreneurs with new app ideas pitch them to a group of celebrity investors. The other is an unscripted series based on James Corden’s Carpool Karaoke. The company maintains it is starting small, to learn what it is doing. Two unscripted shows sound very small indeed.

The latest generation of Apple TV hardware is well designed, simple to use, and was out-of-date from the day it was delivered. The lack of Ultra HD support, which was already common in the market from competitors when the fourth-generation device shipped, was a glaring omission. Though the number of people watching UHD is still relatively small, the feature is a checkbox item for anyone considering a higher-end box. Simply put, if a consumer is not bought into the Apple ecosystem there is no reason to buy an Apple TV.

Apple is not serious about online video services

The simple fact is that Apple does not consider online video services to be core to its business. It’s video strategy is centered around cementing the Apple ecosystem in its customers lives, not creating market leading video services. That said, as it looks for new large markets to keep revenue growth going, can it really afford to ignore such a large market?

Apple has failed to establish itself as a serious player in the market for online video.

It has lost substantial market share in the digital rental and sales market to Amazon.

It has failed to license Hollywood content, when many others have succeeded.

It has made a half-hearted attempted at winning at the television set.

Apple is just not serious about online video.