Are Amazon and Apple moving into a period of détente?

Nearly two years ago a cold war started between Apple and Amazon in the video market. Things have not gone well for Apple since. Perhaps this is why there appears to be a thaw in relations between the two companies.

The thaw in the icy relations between Apple and Amazon started at the big iPhone-iWatch announcement on September 12th. At that event, the company also introduced a new version of the Apple TV. Apple casually slipped Amazon video into the list of 4K video providers supported on the box.

Realistically, if the new Apple TV 4K is to be successful Apple needed Amazon Video on the device. 22% of U.S. consumers say they watch Amazon video, second only to Netflix. That makes Amazon Video a must-have for any streaming media player. 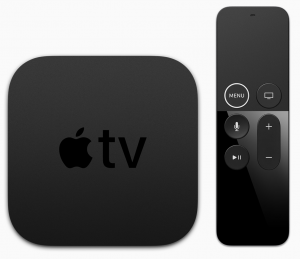 Almost two years ago, Amazon delisted Apple TV from its online store. The story that the company gave was that Apple did not properly support Amazon’s video app. It also made the same claim about Google Chromecast and delisted it too. However, in the case of Apple, many suspected Amazon simply was prepared to pay the Apple tax for product and service sales on iOS devices.

An order page for the new 64GB Apple TV 4K showed up on Amazon’s website this week, but the company promptly took it down again. However, the fact the company has a landing page for the product ready strongly suggests that Amazon intends to begin selling the device once Apple TV becomes available. Certainly, it makes sense for Amazon to resume selling the device if Amazon Video is available on it.

Amazon and Apple are still full-on competitors in the video market. The companies compete head-to-head in two major areas, and Amazon is winning the battle in both instances.

Apple dominated transactional video on demand (TVOD) from the moment it began providing video through iTunes. That is no longer case. According to TiVo’s latest Video Trends Report, 16.6% of consumers say they rent or purchase video from Amazon. Though iTunes is in second place, just 7.6% of consumers say they use it. Google Play store is just behind iTunes with 6.6%. 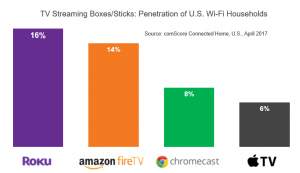 Apple also beat Amazon to market with a streaming media player. Moreover, for the longest time, Roku and Apple vied for the top spot in sales for their respective devices. Once again, Apple has fallen badly behind Amazon, and the other primary contenders, in the market. comScore reports that 16% of U.S. Wi-Fi households have a Roku device and 14% have an Amazon Fire TV. Apple TV is far behind with just 6%. Even Chromecast beats it with 8%.

Is the war over?

The competitive battle between Apple and Amazon is going to rage on for years to come. However, it looks like the cold war between the companies could be coming to an end. We are entering a period of détente, where Amazon and Apple work together where it makes sense, and continue to compete where it does not.

Apple and Amazon stopped working together in video related products and services two years ago.

Since then, Apple’s share in key areas of the video market has slipped far behind Amazon.

The companies appear to be cooperating again where it makes sense to do so.