The resurgence in the use of antenna television continues in the US. The number of homes watching it has increased over 3 million since 2015. But consumers aren’t going back to traditional viewing. They’re blending TV with online services.

The number of homes that use antennas to watch television (over-the-air, OTA, homes) continues to grow. According to Nielsen’s Q1 2017 Total Audience Report, 15.2M (million) homes now use an indoor or outside antenna to watch television. That’s an increase of 23% year-over-year. This represents a big acceleration in OTA homes since between Q1 2015 and Q1 2016 the number increased 10%.

What’s more, this increase is almost entirely due to homes that also have broadband. The number of homes relying exclusively on an antenna for TV has hardly changed at all since Q1 2015, up just 300,000 (5%) to 6.2M. Over the same period, the number of OTA homes with broadband increased 2.4M, or 36%, to 9M.

Broadband only homes up, pay TV down

Those relying exclusively on broadband has increased strongly over the same period. In Q1 2015 there were 3M broadband only homes, and in Q1 2017 that has grown to 5.4M. That’s an increase of 2.4M or 80%. 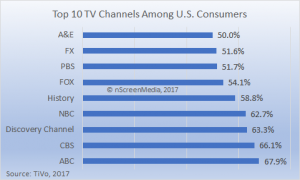 One of the biggest problems for many pay TV consumers when considering cutting the cord is the availability of ABC, CBS, Fox, and NBC. The availability of those channels is very important to many in the U.S. When asked to pick their ideal channels for a custom pay TV bundle, people consistently rank the big four broadcasters in their top 6 TV channels.

Unfortunately, in most areas of the US, it is simply impossible to find the big four broadcasters online. Virtual MVPD services like YouTube TV and PlayStation Vue are working to change that. But it is likely to remain the case in many areas for quite some time.

At the same time, consumers know they are spending a lot more time watching OTT, and a lot less time with pay TV. For example, the average active Roku household now watches 2 hours and 36 minutes on the streaming media player per day.

For an increasing number of consumers that are willing to set up a home antenna, blending OTA TV with online TV services is a great solution. They retain access to the big four networks, continue to enjoy all their online entertainment sources, and save a bunch of money by canceling pay TV.

Getting easier to blend an Antenna with online TV

It continues to get easier to blend antenna TV with online video. TiVo and Channel Master DVR+ are integrating OTA recording and playback with SVOD services like Netflix and Hulu. Sling TV has also integrated antenna TV, its own vMVPD service, and other online video services on its recently released AirTV player.

As it grows ever easier to integrate antenna TV with online video, and pay TV prices continue their inexorable march upward, expect to see a continued acceleration of the antenna TV plus broadband trend.

The growth in antenna TV households in the U.S. is primarily in homes that have broadband.

More consumers are finding the combination of antenna TV and online video to be a compelling replacement for pay TV.