Google is casting a long shadow at IBC 2018 in Amsterdam. From keynotes to show floor presence the company seemed to be everywhere. It all goes to show just how serious Google is about the television.

Google Senior Vice President Neal Mohan gave a keynote at the IBC conference on Friday. During the speech he discussed the company’s success in getting YouTube on connected TV devices: 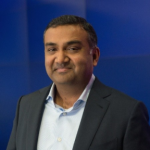 “Thanks to our partnerships with manufacturers, broadcasters and operators like Sky and Virgin Media, YouTube is available on over half a billion certified devices globally – from smart TVs to set-top boxes and to gaming consoles.”

The investment seems to be paying off. Mr. Mohan says the television is now the fastest growing screen for YouTube. In the European Union, the time viewers spend watching YouTube on TV screens increased 45% year-over-year.

“In 2017 alone, consumers watched the equivalent of 268,000 years of content from European Broadcasting Union (EBU) members. Broadcasters are some of the longest and most important partners for YouTube, and we’ve been helping the best broadcast moments find new life online.”

The YouTube team is leaning into the TV opportunity by making a more lean-back experience. Engineers are busy improving machine learning and recommendations to relieve viewers of the need to hunt through all the videos on the site. Instead, viewers will be able to sit back and let the app automatically play their favorite clips and shows.

However, Google isn’t only focused on having YouTube appear on the television. The company is making huge strides in running the complete pay TV experience with Android TV.

Operators are ready for Android TV 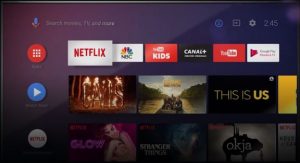 On the show floor, Google’s TV operating system is showing up all over the place. Google’s booth is right at the entrance to Hall 14, where all the new media companies show their wares. The operator tier of Android TV is, of course, a feature attraction. As well, Google ran an Android TV summit on Saturday which was one of the hottest tickets at the show. Many vendor booths throughout the RAI Convention halls also are showing Google’s pay TV operating system. Vendors like Massive, 3SS, Amino, and Accedoare showing operator solutions featuring it.

Pay TV operators have begun deploying it to their set-top boxes. For example, Com-Hem in Sweden has Android TV operator tier running on its hybrid cable/IP set-top boxes courtesy of 3SS’s solution. Amino is demonstrating the end-to-end Android TV integration it provided to Finish operator DNA Oyj on its booth.

Google has been trying to get pay TV operators to use Android TV on their set-top boxes for three years. Why do operators finally appear ready to do it? There are four main reasons:

Many Europeans have embraced SVOD services as a regular part of their television diet but still, have pay TV. Operators see an opportunity to help and retain their customers by integrating SVOD into the pay TV experience. However, it’s hard to predict precisely which SVOD services their customers will use. The simplest solution is to deploy a set-top box platform with an open app store populated with many of the most popular services. Android TV operator tier delivers on this need.

Reason 2: The latest Android TV is a better platform for operators

The Android TV team has included many features operators have requested in the latest ‘P’ edition of the operator tier. For example, CEO of 3SS, Kai-Christen Borchers, described to nScreenMedia how operators could customize the search results. When a customer searches for a movie, the first viewing option shown to the user is from the operator. To see other viewing options, the subscriber must press the up-arrow on the remote.

Reason 3: Vendors are supporting it

It feels like every vendor showing operator solutions at IBC has a version that supports Android TV. For example, Accedo is showing the Android TV 1 Launcher product. Company CEO Michael Lantz showed nScreenMedia how an operator using the product could provide an entirely custom Android TV experience. The operator app starts up when the box starts, and the subscriber remains in that experience throughout.

Google doesn’t charge a license fee for Android TV operator tier. It does come with conditions, like providing access to the play store and inclusion of the Google assistant. However, these are small prices to pay for such a capable operating system.

The company is working to increase YouTube consumption through the TV screen.

Expect the trend to accelerate in the coming months.