The Amazon monster is creeping into every aspect of our lives. From home services to music, the Seattle-based giant is helping connect consumers to the stuff they want. Video is part of the plan, and is helping it take on some of the biggest corporations in America.

Amazon is inserting itself into every aspect of the distribution of video online, and even attempting to increase its influence in the traditional television world. Combining its might in hardware, software and service innovation, it is establishing an ecosystem to rival the best in the business. Here’s how the company is using video to aid it in the battle against four titans of the online economy.

Amazon has decided to mount a direct assault on the YouTube business model with Amazon Video Direct. The company is encouraging “content creators and visual storytellers” to leverage the platform to reach new viewers. Offering a variety of monetization models, the company hopes to entice some of YouTube’s best and brightest away.

Amazon Prime Video continues to add features to make it more useful to users. Aside from increasing the amount of original and exclusive content, the company is adding features to its client others can’t match. For example, Prime members can download videos for disconnected viewing. However, to get the benefits a user must install Amazon’s app store on their Android device. This app store is a direct competitor to Google’s own Play Store.

On a more pragmatic level, Amazon is using hardware to undermine Google’s ecosystem. Amazon Fire TV Stick is clearly a Chromecast replacement, but Echo also poses a direct threat. Rather than running to find a smartphone to check on movie availability, an Echo owner just needs to “ask Alexa”. Of course, ensuing rental or purchase activity is liable to accrue to Amazon and not Google. 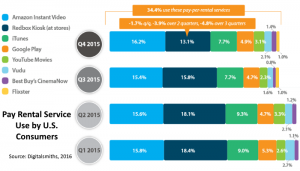 Amazon and Apple are very much head on competitors these days. The Amazon Video store is a direct competitor to iTunes. For video rentals Amazon is already well ahead of iTunes. According to Digitalsmiths, 16% of consumers use Amazon Prime Video to rent movies, and 8% say they use iTunes.

While Amazon can’t challenge Apple on the device front it is working to inveigle itself onto Android devices, coopting them into the Amazon universe. This, in the end, could be a far more powerful approach. As Apple device sales plateau in many first-world markets, the reach of the company’s legendary ecosystem is similarly limited. Amazon, on the other hand, can continue to grow, riding the wave of broader market growth.

Finally, Amazon is showing it is capable of out-innovating Apple in some circumstances. For example, Echo is clearly resonating with consumers, and helping bring Alexa to prominence in many consumer households. Apple has no product in the market to match it.

Though this rivalry is perhaps the most unformed of the four discussed, it is nonetheless just as real. Jeff Bezos, Amazon’s CEO, has been able to convince Brian Roberts that his company can help sell pay TV with Amazon Cable Store. The first implementation had a rocky start, and looking at the comments on Amazon’s site (Comcast has a 1-star rating) the store could be doing more harm than good to the already poor reputation of Comcast.

The companies compete directly for consumer entertainment dollars, as both provide video rentals and sales. However, a much bigger threat comes from the Amazon Streaming Partner Program (SPP). With the base tier of Amazon Prime Video ($9 a month,) a Prime member can easily add other SVOD packages from the likes of Showtime and Starz. Amazon handles the billing, promotion and customer management. Sounds a lot like what cable does for content companies.

Though much has been written about how Amazon is attempting to compete directly with Netflix, Reed Hastings has never seen it that way. He believes there is room for both in consumer entertainment budgets. That said, Amazon does still represent a challenge for Netflix. As people spend more time inside the Amazon ecosystem it becomes more difficult for Netflix to resist joining it. And were Netflix to join the Streaming Partners Program that would be a huge win for Amazon. Not only could Amazon end up with small share of the revenue Netflix earns through SPP, it would also help increase the value of Amazon ecosystem.

Amazon’s market clout is beginning to be noticed by Washington and the company will need to tread carefully. While Donald Trump’s rant about Jeff Bezos stumbling into anti-trust territory was more veiled threat than coherent argument, it illustrates how visible the company is. And its recent ban on selling competitor products Apple TV and Chromecast through its retail store probably did more harm than good.

That said, the full-court-press on the video market is sure to continue as Amazon looks to leverage its market strengths to continue growth.

Amazon is using video as an offensive weapon in its desire to extend its market influence with consumers.

Its sharp focus on video is helping it establish the Amazon ecosystem.

This is bringing it into competition with giants such as Google, Apple, Comcast and Netflix.