By any measure, Amazon has grown to dominate the transactional video market online over the last five years. However, it is becoming a bigger fish in an increasingly smaller pond.

According to industry insiders, Amazon’s video store now dominates the market for rentals and sales. One US cable TV executive says that show rental and purchase revenue from Amazon’s store will exceed Apple TV/iTunes and Google play combined this year.

Another independent film distribution executive says that Amazon has grown so much in the 12 to 18 months that:

“It used to be iTunes would account for the lion’s share or at least half of total revenue, but now that’s being shared between Amazon and iTunes in most cases.”

Looking just at the rental activity, it’s clear that Amazon has out-marketed and out-maneuvered iTunes consistently over the 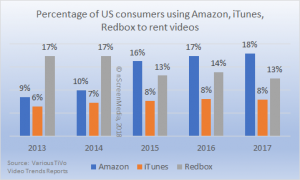 Though the growth in the transactional video store is certainly good news for Amazon, it is not for the video industry overall. Between 2013 and 2018, the number of people saying they used Redbox fell from 17% to 13%. Consumers are turning away from disk rentals and purchases and are not converting the behavior to the digital world.

Digital transactional revenue has not made up for disk losses. Digital sales and rentals have increased 30%, or $250 million, since 2014.

Amazon still a winner in the market for video

Despite the success of digital transactions through Amazon’s video store, the company has likely seen overall video rental and sales revenue fall. Amazon is one of the biggest sellers of video disks. Given the precipitous fall in disk sales, it is doubtful the growth in digital sales and rentals has grown fast enough to compensate.

That said, Amazon is almost certainly still a winner overall in video since it is a big participant in the growth of the SVOD market. Not only is it benefiting from increased loyalty due to the Prime Video service, but it is also deriving revenue from the success of other SVOD providers. The company’s Channels program is instrumental in driving subscribers to services like Showtime and CBS All Access, and it receives financial incentives for doing so.

Amazon has come to dominate the declining transactional video market in the US.

However, the decline in video purchases and rentals have likely wiped out any gain in revenue the company has enjoyed.

Amazon also participates in the explosive growth of the SVOD market. The additional revenue it brings means the overall video revenue picture at the retailer is almost certainly one of robust growth.