Can Apple and Roku mount a serious challenge to Amazon Channels?

Amazon Channels has first mover advantage in the SVOD aggregation stakes. Do Roku and Apple have what it takes to catch up?

Variety reported today that Roku is planning to create an SVOD store along the lines of Amazon Channels. Last month Variety said that Apple was planning the same thing. The model seems to be working very well for the 200+ services that have signed up with Amazon. Will SVOD services be as keen to work with Apple with Roku? Here are four things they will have to deliver if they are to stand a chance.

The extraordinary video reach of Amazon is a big part of Channels’ success. According to Jeff Bezos, Amazon Prime has more than 100 million subscribers. With three-quarters of Prime members using the video service, most are accustomed to using Amazon to find and watch video. However, Amazon’s reach is even larger than that. 18% of the US population use Amazon to rent or purchase videos. Each one of these visits is an opportunity to sell people SVOD subscriptions.

Neither Apple nor Roku can come anywhere near Amazon’s video reach. Apple’s iTunes is used by 8% of the US population to rent or buy videos. As well, Apple TV holds a 15% share of the streaming media player market. There are 20 million active Roku users.

Amazon is perhaps the preeminent marketer in the world today. It has a huge trove of user data and has spent the last 24 years honing its ability to leverage the data to market to its customers. More specifically, it has data on customer viewing habits through Amazon Prime Video and its TVOD store. The company is applying all its accumulated experience and knowledge consumer video habits to selling Channel partner services to its customers.

Apple certainly has a great deal of experience in marketing to consumers. However, when it comes to marketing video products, the company is much less successful. It started out as the leader in the TVOD business but quickly lost that lead to Amazon. It continues to fall further behind. Apple will need a much better understanding of its customer’s video habits, and a much more aggressive marketing approach, if it is to be a successful SVOD store.

Roku is not a major player in the TVOD space. It provides marketing assistance to SVOD providers that pay for it. However, marketing abilities on the Roku platform are far more restricted than Amazon.

Unified search is perhaps the most powerful marketing tool for video services. The moment when someone does a title search while in front of the TV is the most powerful moment to make a pitch for an SVOD service. It also gives the platform owner a huge advantage as it gets to decide the order in which the search results are displayed. All the TV platforms owned by the three SVOD store contenders include unified search. However, the edge must go to Roku. 37% of broadband households with a streaming media player own a Roku. Amazon Fire TV is close behind with 24% and Apple TV a distant fourth with 15% share.

Though the connected TV is critical in the delivery of premium video services, 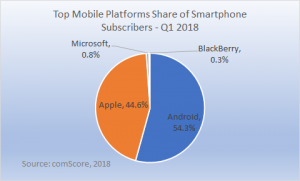 access from all screens is also important. Here it is hard to beat Apple. It owns 45% of the mobile market. If it can tightly couple the Apple SVOD store with its mobile devices neither Amazon nor Roku will be able to come anywhere near to matching Apple’s screen reach.

By these four measures, it’s hard to see how either Apple or Roku can mount a serious challenge to Amazon Channels. That said, they may be able to build an interesting business and attract many SVOD services to their store.

Apple and Roku appear ready to mount a challenge to Amazon Channels.

In the areas of video reach and marketing ability, neither Apple nor Roku is even in the same league as Amazon.

When it comes to unified search on television, Roku has the advantage.

If Apple can leverage its mobile base, it would have a huge advantage over Amazon and Roku.