There are plenty of homes capable of receiving addressable ads. So, why can’t broadcasters such as Turner reach them? Fragmentation is the problem and Cadent has a new solution.

Advertising addressability is one of the most important needs of the linear television industry. Anyone that doubts that need only read comments at CES 2018 in January made by John Martin, the then CEO, and President of Turner Networks:

“My fear…is that by the time the industry gets to full addressability everybody is going to be watching on Hulu and Netflix.”[i]

Mr. Martin was concerned that his great ad-supported content must compete with ad-free experiences from SVOD services. He knew the key to becoming competitive was to make the ads more relevant to the viewer with addressability. However, though he had plenty of addressable inventory, Turner was only able to target 5% of its audience. What was the holdup? According to Mr. Martin, “the industry is too slow, too fragmented.”

Why Turner can’t target most of its audience

Paul Alfieri, Chief Marketing Officer at Cadent, says that most households in the US can receive addressable ads. The problem, he says, is that each pay TV operator has its system for taking, managing, and reporting ads. TV providers like Turner had to integrate with each one separately and maintain separate ad workflows to support them. Such an untenable situation condemned companies like Turner to reach only a fraction of their audience with targeted ads. Today, however, Turner has a new option.

“We’ve streamlined the complexities of household addressable TV campaigns to help accelerate spend while helping our partners expand the reach of their unique supply to meet the needs of national buyers.”

Cadent’s Advanced TV Platform allows advertisers to plan and implement a campaign based on their specific marketing goals. For example, campaign 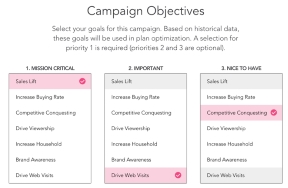 managers can select from several objectives, including sales lift, competitive conquest, and brand awareness. Campaign managers can select their targeting criteria based on first-, second-, and third-party data anonymously matched to US addressable homes.

Advertising managers can track the performance of the campaign in a unified dashboard through the Advanced TV Platform. For example, they can see the total household reach, the number of impressions, and the number of ads delivered by TV network across pay TV and OTT delivery networks.

Cadent has already delivered over 3,000 addressable TV ad campaigns. The experience affords Mr. Alfieri a clear view of the benefits of delivering the right ad to a targeted audience. He says Cadent helped one auto manufacturer increase the number of cars sold by 4,100 in one recent addressable campaign. He also says addressable ad CPMs are selling for between three and four times the untargeted rate.

These examples demonstrate how everyone benefits from being able to deliver addressable ads at scale. Higher CPMs mean broadcasters like Turner can lower ad loads without losing ad revenue. Lower ad loads improve the competitiveness of the linear experience versus SVOD services. Advertisers enjoy improved ad performance. Also, they more may not have to pay more for a campaign since they don’t have to pay for ad views by disinterested viewers.

[i] Speaking at CES 2018 during the Reimagining Television panel discussion with Randy Freer, CEO of Hulu.