Reaching TV viewers with ads is hard in today’s SVOD world. It’s about to get tougher as online viewers subscribe to more services and have more ad-free viewing choices. However, new data shows that online TV viewers will not rely on ad-free services for all their viewing needs.

The number of services the average online video subscriber has in the US is 3.4 and in the UK is 2.9. Further, US subscribers are spending $29 a month and UK subscribers £19.20 ($22). New research from OpenX suggests people are willing to spend much more.

The survey suggests as people cut-the-cord, they are willing to move the liberate pay TV subscription money to new online TV services.

Reaching consumers with ads during primetime a challenge

Just as with traditional TV, the primetime hours between 8 PM and 11 PM are peak viewing times for online TV services. Conviva data shows that there is a huge spike in video plays of premium video during primetime, peaking at around 9 PM. Ad-free SVOD services generate most of the viewing activity.

With the entry of new ad-free services from Disney and WarnerMedia later this year, the options to watch ad-free during primetime are expanding. As well, SVOD providers are working to keep people in their ad-free environments for ever longer periods. Of course, binge-viewing support through auto-play of the next episode is a very popular consumer feature. Netflix is experimenting with a “shuffle-play” feature for popular TV shows like Friends and The Office.

The message is clear for advertisers. Consumers are increasingly opting to watch ad-free SVOD services during their most focused TV viewing sessions. Moreover, the options to watch ad-free continue to multiply, with new TV services like Disney+.

No one business model will dominate 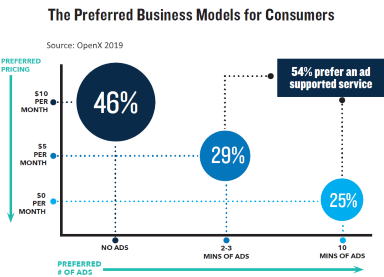 The good news is that there are still opportunities for advertisers to reach consumers watching online TV services. The OpenX survey asked online video viewers which business model they preferred. 54% said they preferred an ad-supported service, provided it was cheaper than a similar SVOD service or free. 29% say they would be willing to pay $5 per month for a service that delivered 2 to 3 minutes of ads per hour. A quarter would watch 10 mins of ads per hour for a free service.

There is plenty of evidence that people are willing to watch ads in their online TV. Hulu now has 25 million subscribers. According to Randy Freer, Hulu’s CEO, the majority sign up to watch with ads, though ad-free viewing is available. Mr. Freer plans to keep it that way. Hulu recently cut the price of the entry-level ad-supported on-demand membership to $6 per month. To watch without ads costs twice as much.

Roku introduced the free-ad-supported The Roku Channel in September 2017. Since then, it has become the 5th most popular channels on the Roku platform. As well, the average revenue per unit (ARPU) has increased from $13.78 per quarter to $17.95 per quarter.

The data shows consumers are using services with different business models; some ad-free, some ad-supported, and some mixing both approaches.

As consumers cut-the-cord, they are moving increasing amounts of money into online ad-free TV services.

Increasingly people are opting to watch ad-free during their most focused viewing times.

Ad-supported TV services are expanding although much of the viewing could be taking place outside of primetime.