Every year NTCA–The Rural Broadband Association conducts a survey of its 850 members to track the progress of broadband and video services provided by its members. The predominantly rural operators provide service to small local communities. Looking at the survey of the NTCA membership, their business has changed radically in the last four or five years. It has tracked the changes impacting urban and suburban citizens as consumer switch from services tied to custom networks to services delivered over the Internet.

The NTCA membership has invested a lot in upgrading the last mile connection to the home over the last several years. In 2013, nearly half of customers were connected over old twisted-pair copper wire. 29% were connected using fiber (fiber-to-the-home, FTTH,) 12% by fiber to a local hub and then by copper wire (fiber-to-the-node, FTTN.) By 2016, 41% were connected by FTTH, 36% by copper, and 9% by FTTN. The number connected via coax cable (cable modem) remained the same at 12% throughout the period.

The changing face of video services

It is no coincidence that the dramatic shift toward faster broadband speeds in the home parallels the growth in SVOD services like Netflix. Between 2013 and 2016 US streaming subscribers to the SVOD giant increased from 33 million to 49 million.

As online video services have prospered over the period, the business of pay television has come under increasing pressure. No group feels that pressure more than small rural providers that comprise the bulk of the NTCA membership. 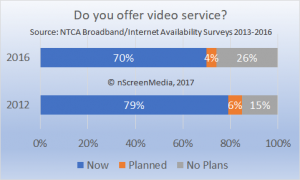 Throughout this period programming costs were cited by virtually all survey respondents as the number one barrier to continuing or introducing a video service. They have every reason to be concerned. 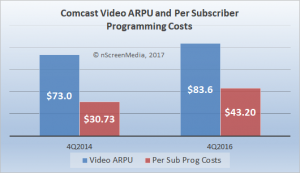 There are two things to keep in mind with the Comcast data. Firstly, small operators likely are not able to negotiate as favorable deals as Comcast. That means the amount of ARPU left over after paying content license fees is much less. Secondly, smaller operators are much less able to withstand dramatic erosions in profit margin.

Looking at the Comcast data, it is surprising so many continue to provide service at all!

The investment in broadband by smaller operators could lead to relief from the crisis afflicting their video services. Operators may be able to improve margins by switching their video services to IP and delivering them over broadband. For example, they can switch to cheap IP set-top boxes such as those provided by Amino. They could even opt to deliver service to an app running on a customer device.

They can also look at partnering with online video providers such as Sling TV and Netflix to deliver a video service tier bundled with broadband.

Customers have embraced the higher broadband speeds the investment delivers.

Video services have come under increasing pressure in the last five years.

Fast broadband gives small operators options to improve their video service outlook that they did not have before.