The opportunity to cut-the-cord has never been better for pay-TV subscribers. Yet cord-cutting remains muted in the US. What’s holding consumers back from switching to the Internet and saving a bunch of money?

SVOD services are now in 56% of US homes, bringing a huge array of originals, TV shows and movies. Signs are that consumers are using these services more than ever. A new report from Verizon finds that viewing sessions for premium online video exceed an hour on mobile devices. On larger screens, such as the PC, viewing sessions top 80 minutes. 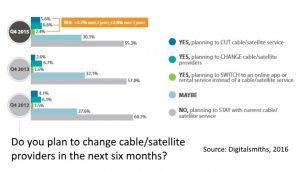 Merchants like Walmart are also making it very easy to cancel pay TV. The retailer has created a place on its website to assist would-be cord-cutters. It helps consumers select SVOD providers, pick a connected TV solution, and select the best ISP. It even helps keep broadcast TV in the home by offering a range of HD antennas for off-air viewing.

Yet just 200,000 homes left the pay-TV fold between Q4 2015 and Q1 2016. In other words, just 3% of those saying they would cut-the-cord actually followed through with it. This is an extremely low number, even though consumer actions are usually much lower than intentions. What is happening to stymie the intentions of the cord-cutter intenders? Operators are employing two dubious pricing practices to make it really tough to get rid of pay-TV.

Although the average pay-TV consumer pays $99 a month for pay TV, they can’t save this when they try to cut-the-cord. Normally operators charge more for other services when a subscriber moves from 3 to 2 services or 2 to 1. That means dumping TV reduces the overall bill far less than the $99 many subscribers expect.

How much can a subscriber really save? If you’re a Comcast customer, not a lot! The company’s policy states: “after promo, or if any service is cancelled or downgraded, regular rates apply.”* What does that mean? Comcast’s entry level triple play bundle includes 140 channels, 100 mbps broadband and unlimited voice for $99.99 a month. Drop television and you’ll pay at least $59.99 for broadband and $44.95 for unlimited voice, for a grand total of $105 a month. With Comcast, dropping TV means paying more, not less!

Operators typically try to save a quitting pay-TV customer by offering more competitive bundle rates. Many guarantee no price increases for a period of time if a customer signs a contract for 1 or 2 years. Some also offer minimal TV packages with broadband at effectively zero cost. Comcast offers starter broadband, 10+ channels of local TV, plus the ability to stream HBO content for $49.99 a month. Considering the predatory pricing policies with Comcast detailed above, it can be pretty tough to follow through with the desire to cut-the-cord.

How long can operators keep these practices up? With the sharp increases in the cost of licensing TV content showing no signs of slowing down, perhaps not much longer. At Comcast, programming costs increased an average of 8.4% between 2011 and 2015, while average video revenue per subscriber increased only 3.5%. Simply put, eroding margins make it harder and harder to support aggressive bundle pricing practices.

Many people intend to get rid of pay-TV, but almost none of them follow through.

Questionable pricing practices by triple play operators often erase any potential savings from dropping television by increasing the price of the remaining services.

In some cases, customers can end up paying more overall after dropping pay-TV.