Reports have OTT video services crossing the 50% barrier in three dimensions this week. All of it adds up to online video entering the mainstream of our entertainment lives. 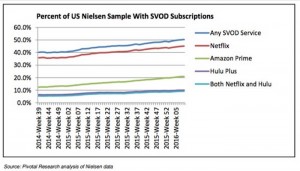 The first indicator that OTT video is now used by the majority comes from Pivotal Research Group. It analyzed Nielson data and concluded that the number of US homes with an SVOD subscription just crossed the 50% mark. It could be that the 50% barrier was broken by SVOD even earlier than that. Digitalsmiths reported that the number of people saying they used an SVOD service crossed the 50% threshold sometime in 2014. In Q3 2015, the company says 56% of people report using SVOD services.

Pivotal went on to say that the impact SVOD services were having on TV viewing was minimal. Other data finds otherwise. For example, GfK and IAB reported last year that TVs share of daily media time has fallen 7% since 2010. Nielsen’s own data from Q3 2015 showed declines in live TV viewing across all age groups, with the biggest declines in the 12-24 year olds (-12%) and 25-34 year olds (-8%). And on-demand viewing through DVRs and VOD doesn’t come close to making up the difference.

The second indicator that OTT video is now in the majority comes from The NPD Group. The company reports that 52% of US Internet homes have at least one television connected to the Internet. Again, this number may be a little low, as Leichtman Research says 56% of all homes (not just broadband households) have a TV connected to the Internet. Remarkably, NPD also reports that the average home has nearly three devices installed that they could use to watch OTT video on the television. The game console is still the device with the deepest penetration, but it is not the device that is driving the growth. That honor goes to the streaming media player.

According to Nielsen, there was a 100% increase in video usage through streaming media players between Q3 2014 and Q4 2015. This makes sense when you consider the popularity of SVOD services.  Much of the content delivered by the big three (Netflix, Amazon, Hulu) comes from television, so it is only natural for consumers to want to continue to view it there.

The final 50% barrier crossed by OTT comes from Vindicia. The company wanted to know how many subscription service customers would be interested in upgrading to a higher level of membership. 52% said they would be very interested in doing this. Though Vindicia’s survey was for all online subscription services, including shopping services like Amazon Prime, SVOD dominated the category.

Vindicia’s result suggests SVOD subscribers have begun to think of the services as extendable, in the same way as they think about pay TV. It also lends support to an emerging trend in the industry: allowing subscribers to buy out of the ads. Hulu announced last year that for an extra $4 a month, existing subscribers could watch ad-free. YouTube joined the ad-free party when it announced its subscription service Red. Even CBS says it may do the same with CBS All Access. While the focus on ads is great, the Vindicia data suggests these video services may have room to do more. 40% of respondents said they’d be very interested in “first access to new products or services.” Netflix looks to be taking advantage of this by offering Ultra HD and twice the number of simultaneous streams for $4 more a month.

SVOD services are in more than 50% of US homes.

More than 50% of homes now have a TV connected to the Internet.

More than 50% of consumers with an online subscription would be interested in upgrading it to a premium level of service.