Three reasons we will have less than 10 SVOD services each

The head of CBS Interactive thinks that people will end up with as many as ten SVOD services. Here are three constraints that will likely limit the number to less than that.

According to Marc DeBevoise, president and chief operating officer at CBS Interactive, we have only just begun signing up for SVOD services. He says people currently have about three services and will ultimately have around 10.

In a survey fielded mid-2018, nScreenMedia found that the average US SVOD user had 3.4 services. So, Mr. DeBevoise is certainly correct that streaming customers have already developed an appetite for more than one SVOD service. However, could they triple that number in the next few years?

What we can learn from TV channel usage 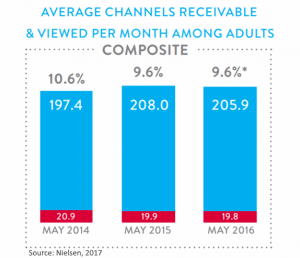 If we equate SVOD services to TV channels, there could be an appetite for 10 or more SVOD services. Nielsen says that, of the 206 channels available to US adults in May 2016, people tuned 19.8. The number of tuned channels decreased slightly from three years earlier, despite the number of channels increasing slightly.

What’s more, the number of tuned channels seems to be relatively stable no matter the number to which people have access. For example, in 2008, the average adult had access to 129.3 channels and tuned 17.3 of them.

This data tells us that given a chance, people will watch many different TV sources, but that there is a limit to the number they can manage. SVOD presents a similar picture. There are hundreds of SVOD services. People are already using 3.4 of them, and that number is growing.

Does the TV example suggest that we will end up subscribing to 17 or more SVOD services, not the ten suggested by Mr. DeBevoise? Far from it. Here are three constraints that will limit the number to well under 10.

One important difference between TV channel and SVOD usage is that there is no incremental cost for viewing another TV channel. Once a consumer has signed up for a pay TV package, she can watch as many or as few channels as desired. With SVOD, there is a substantial barrier to watching a new service: the need to add another subscription payment.

Today, SVOD services vary in monthly cost between $4 and $15. Depending on the services selected, 10 of them could cost anywhere from $80 to $100 or more per month. Most consumers won’t spend anything like that while also paying for the typical pay TV subscription. Cord-cutters might also shy away from spending that much since the primary reason for cutting the cord is to save money.

Some SVOD services do feel quite like a TV channel. CuriosityStream and BritBox, for example, have strong associations with a specific genre or type of content. They roughly correspond to the Discovery Channel and BBC America/PBS in the traditional TV world. Other services defy classical classification. Netflix’ library spans many genres, with tremendous depth and quality. Disney+ will likely end up the same. Similarly, Hulu provides much more than any individual broadcast channel.

Having three or four Netflix-type services will probably overload most people’s ability to watch. Add in two or three more specialized services, and most people will have more than enough interesting content to fill their viewing time.

The availability of free-ad-supported TV (FAST)

The emergence of FAST services like Pluto TV, STIRR, and The Roku Channel means that viewers have an alternative to subscribing to SVOD for online entertainment. When they grow weary of hunting through their existing subscription services, rather than subscribing to another, they can watch for free with FAST.

Already, people can watch the news for free on CNN and CBSN in Pluto TV, and local news on STIRR. Movies, TV shows, and specials are available in The Roku Channel and IMDb Freedive. Sports, comedy, and kids’ content is also available.

The three limitations of cost, content overload, and quality TV in FAST services will likely limit the number of online video services people pay for to less than the ten suggested by Mr. DeBevoise.

Some suggest that consumers will be comfortable paying for up to 10 SVOD services.

Cost, content overload, and the availability of plenty of quality ad-supported TV will limit the number of subscriptions to less than 10.