12-fold increase in mobile video volume by 2021, led by smartphone

New data from Ericsson and FreeWheel paint a rosy picture for mobile video. Mobile data volume is set to increase 7 fold over the next 6 years, with video’s share increasing from 50% to 70%. The smartphone looks to be in the driver’s seat.

The biggest driver of that growth is video. Today about half of all mobile data is consumed with video. By 2021, that share will have increased to almost 70% of the data volume. Video watching is a popular pass time on both tablets and smartphones. 55% of tablet data traffic volume is video. Video traffic is also the largest component of data volume for smartphones, consuming 43% of data volume. 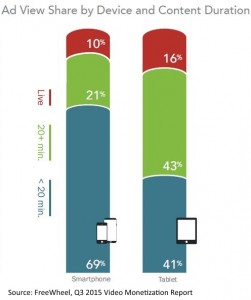 FreeWheels ranking by ad views shouldn’t be confused with total video consumed however. For example, BBC iPlayer sees more online tablet requests than the smartphone (and drives zero ad views in the process.) August 2015 iPlayer data says that 29% of online video requests came from tablets and 24% from the smartphone.  As well, looking at ad views is liable to favor the smartphone over the tablet.

FreeWheel says that the short-form video type most preferred by smartphone users is music. 31% of the ad views were served against music video. Reliving the touch-down catch or winning goal are also very popular on the smartphone, with 19% of ad views served against on-demand sports. The tablet shows a radically different content mix. Full episode 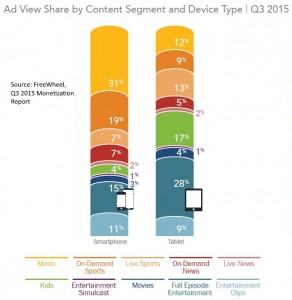 By 2021, the mobile device mix is liable to have shifted considerably further toward the smartphone. With tablet sales falling and smartphone screen sizes increasing, it could be that most of the tablet market will have been replaced by large-screen smartphones, or phablets, by 2021.

Within 6 years, the smartphone (and bigger screen phablet) could have completely replaced the tablet in the market.